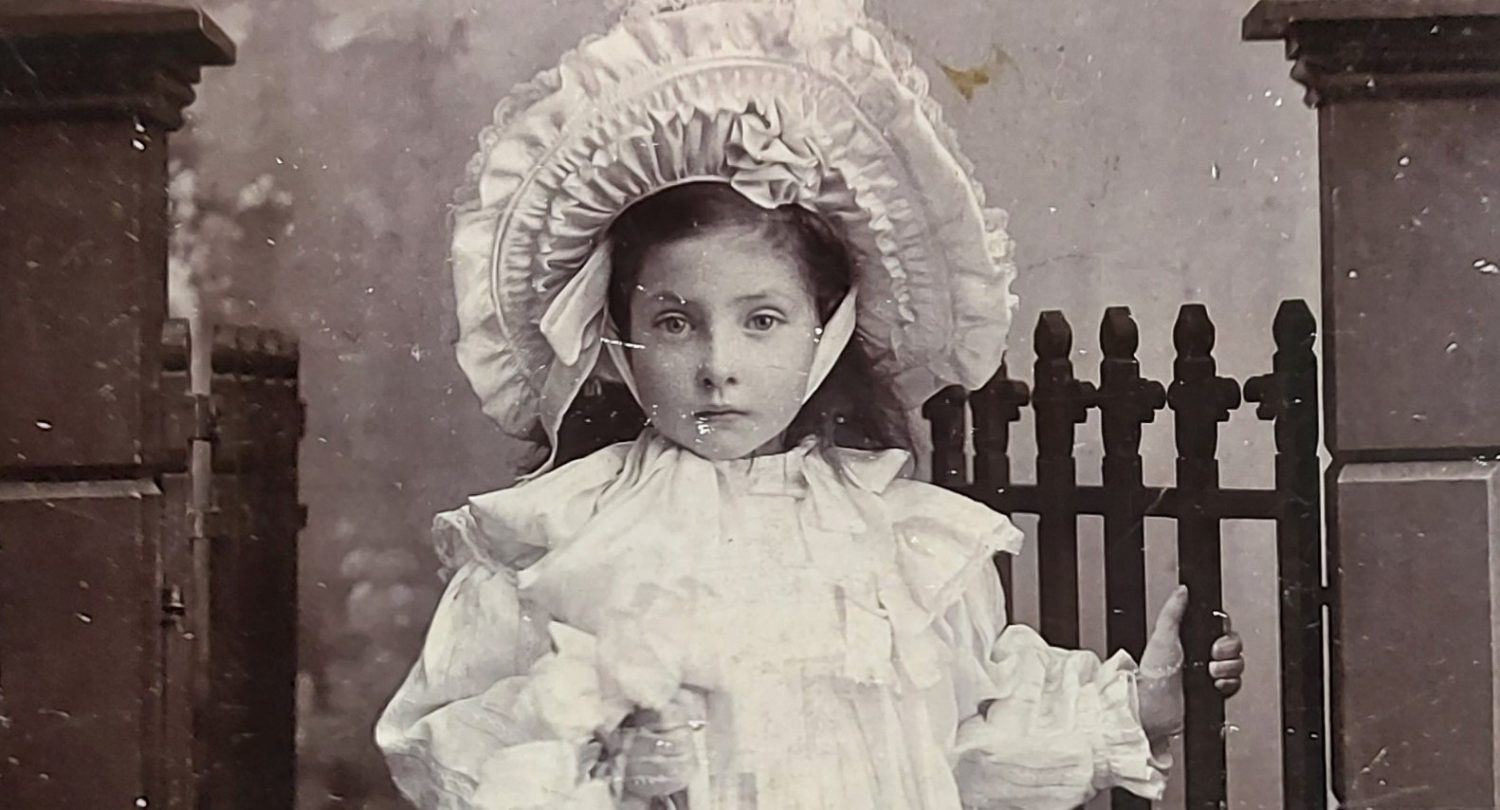 A little girl stands facing the camera holding onto an iron gate with one hand and the other is at her waist. She is wearing a white ruffled dress with large collar and puffed sleeves at the wrist. Her dark hair goes behind her back and she wears a large white bonnet turned upwards with layers of ruffles. Image courtesy of Preston Park Museum and Grounds.

In this blog we are looking into the children’s clothing we hold in our collections. Most of the clothing we keep in our museums covers the last 200 years.

Until the early 1900s both boys and girls wore dresses from birth until the age of about eight. These dresses would be made of cotton, be floor length and be embellished with lace, flounces and up to three petticoats for upper classes children. Most dresses would have been white as they could be easily bleached back to colour. These dresses did inhibit movement and toddlers found it difficult to move freely when crawling and learning to walk. 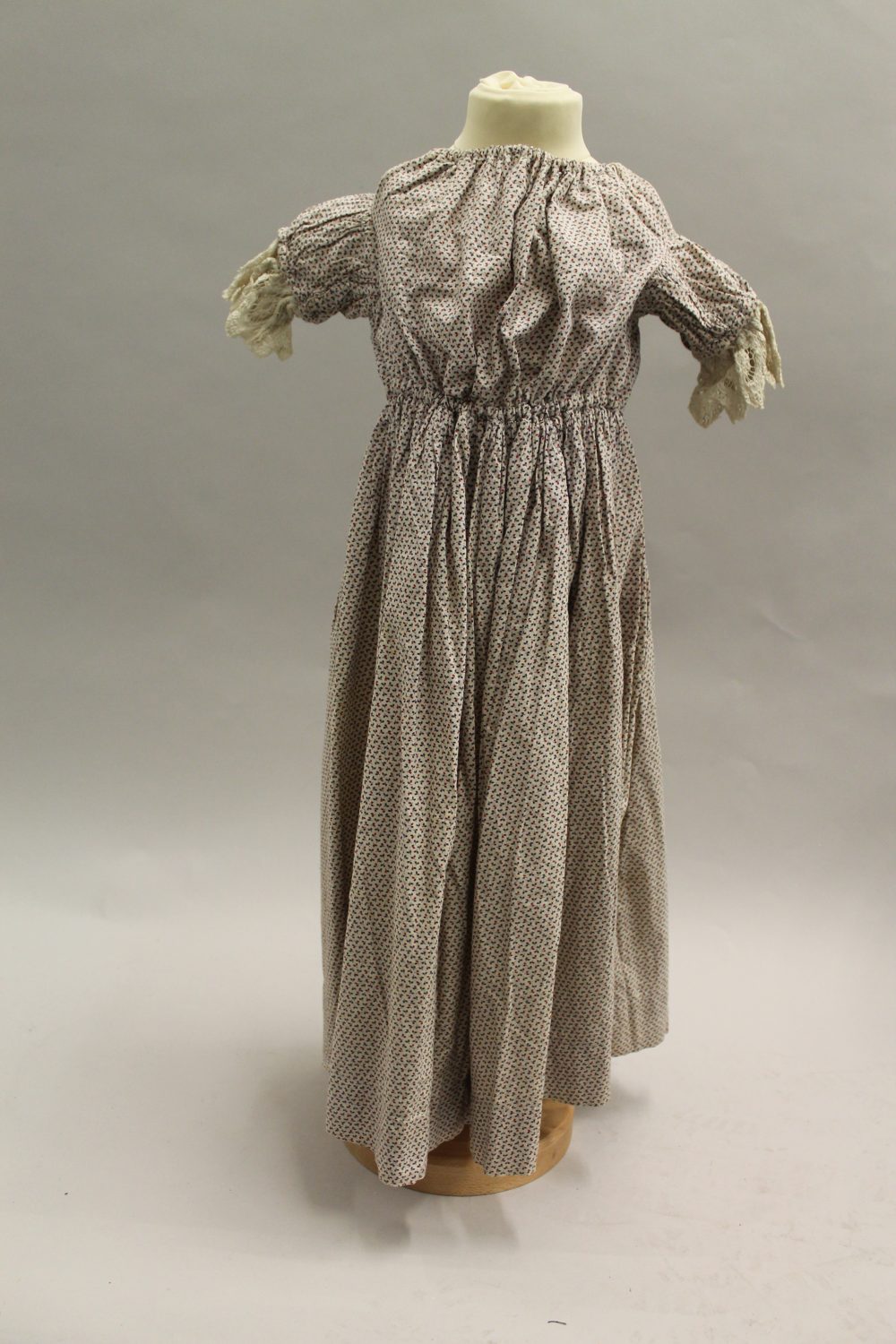 Small dress for a baby with a gathered empire line waist band. The dress is long and would have gone past the feet of the child. Its a cotton patterned fabric with tiny leaf detail, 1800 - 1860. Image courtesy of Preston Park Museum and Grounds.

Girls were dressed as mini women, reflecting the style of their mothers. During the late 1880s girls’ clothing followed the fashionable trend of becoming slimmer with emphasis of a mini bustle at the back. They also emulated the accessories of women too, following suit with the latest bonnets and hats.

As they got older the hem line of their dresses became lower until the age of 16 when they would come of age and celebrate by lowering the hem of their dresses to the floor. Girls started wearing corsets from a young age, often being encouraged to sleep in them to for better posture. Many girls grew up to have such weak muscles thanks to their constant dependence on the support of the corset and needed to wear them constantly to be able to stand up. 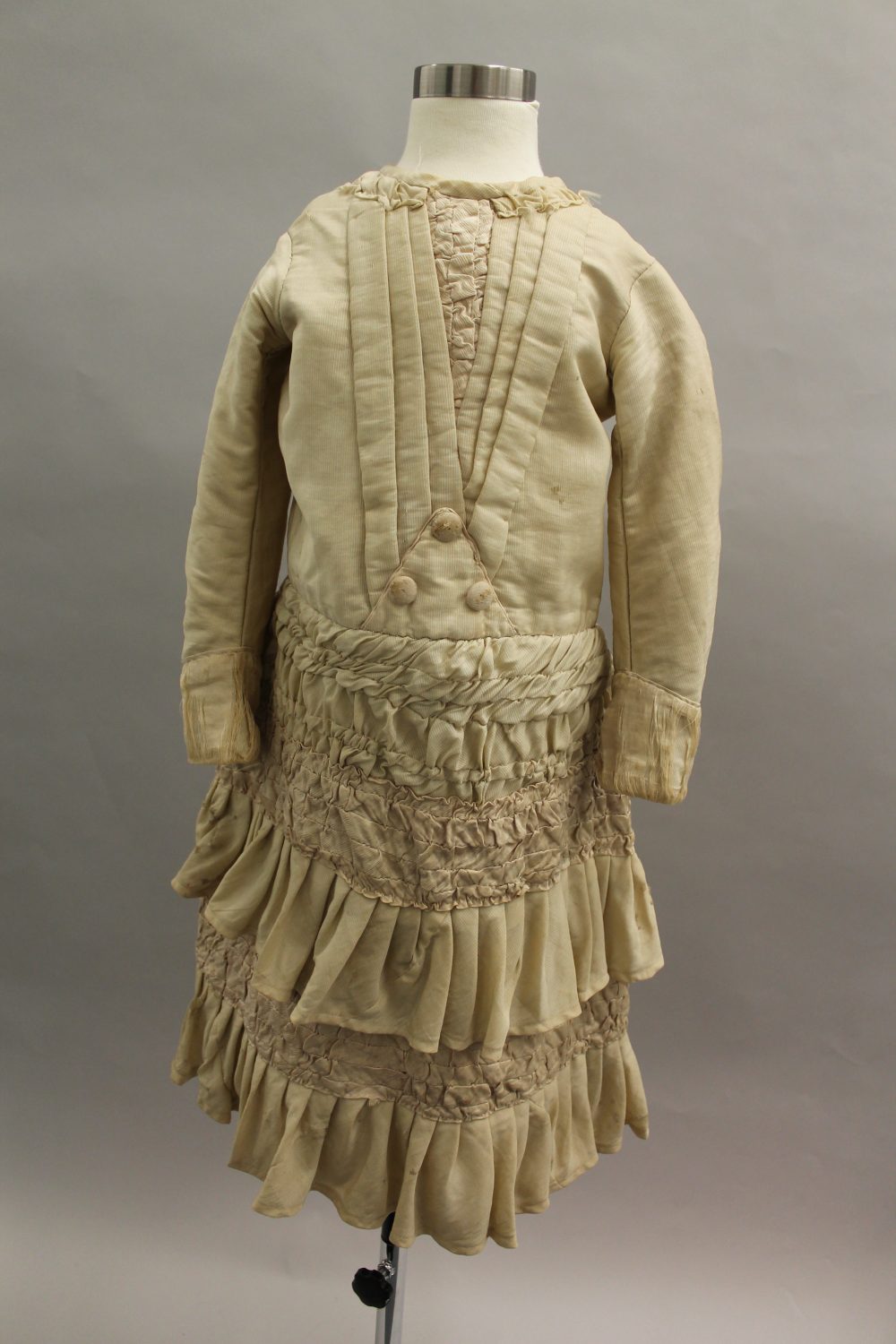 Girls cream coloured dress. The bodice has sewn detail going down the front into a point and the skirt features flounces. The back features a small bustle mimicking the fashionable style of women at the time, 1880s. Image courtesy of Preston Park Museum and Grounds.

Boys would have been ‘breached’ around the age of around six. This is when little boys would start wearing trousers for the first time. It was a coming-of-age symbol and would be celebrated by the family. 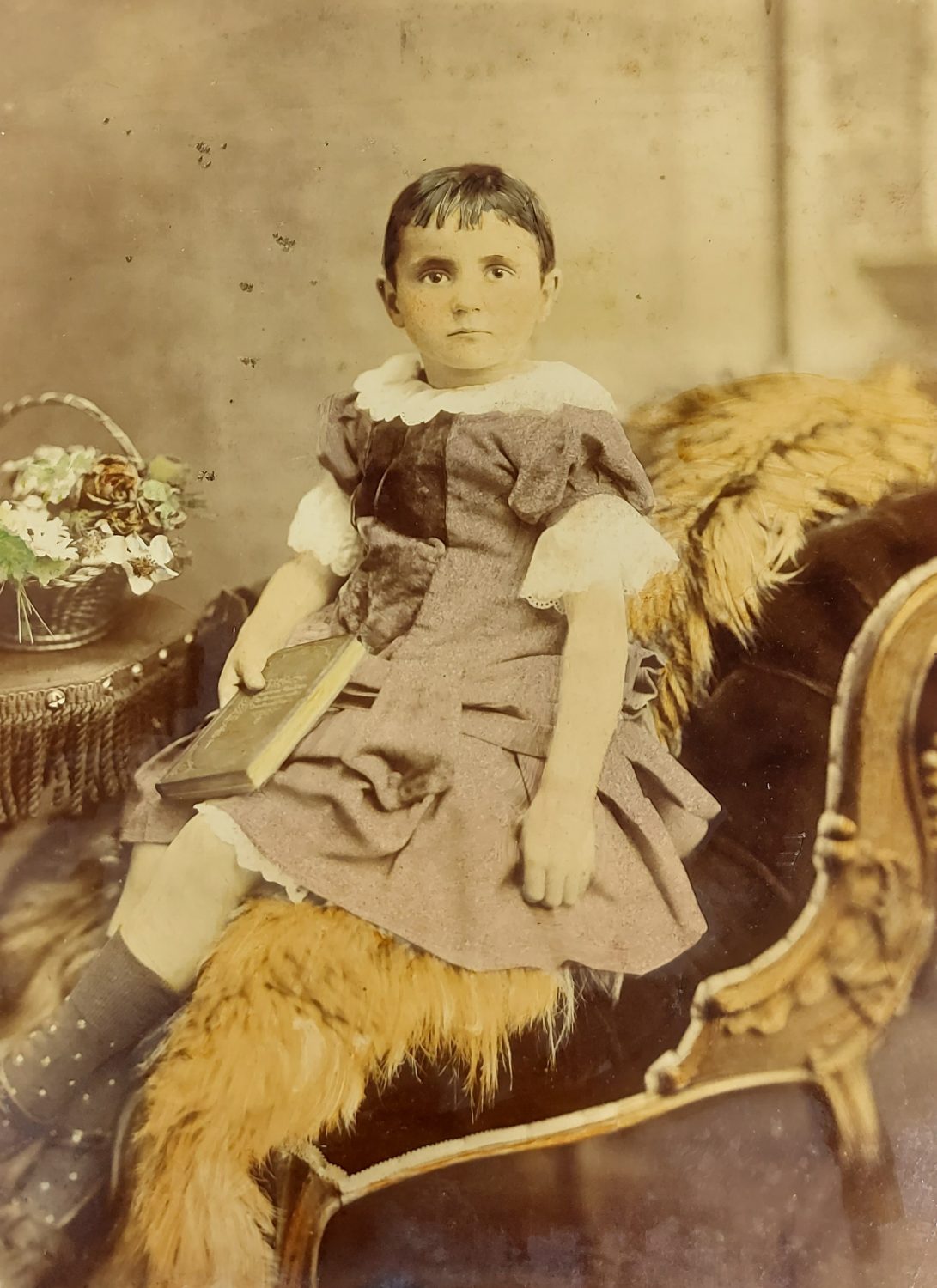 Coloured photograph of a child seated on a chair facing the camera. The child is wearing a dress with fancy details such as bows on the sleeves and down the bodice. Short sleeves feature lace detail and a lace collar. Its likely this child is a boy because of the short hair but we have no way of knowing for sure, 1870 - 1890. Image courtesy of Preston Park Museum and Grounds.

Throughout history there was no real option of specially designed children’s clothing, instead they were dressed as mini adults. But one of the earliest specially designed children’s garments was known as the skeleton suit. The suit consisted of tightly fitted trousers with a high waist buttoned to a jacket. It was a popular choice of clothing for little boys from the 1790s.

The skeleton suit was a tight fit, hence the name because it was said to cling to the skeleton. They were lavishly embellished with buttons and silk sashes for special occasions, but they were incredibly uncomfortable. The generation who grew up wearing them chose not to dress their own sons in them, instead adapting the looser fitting trousers of the working classes, elevating them to a more popular style. By the 1830s the skeleton suit was not in fashion anymore.

Luckily for us one of these skeletons suites survives in the collection at Preston Park Museum and Grounds. 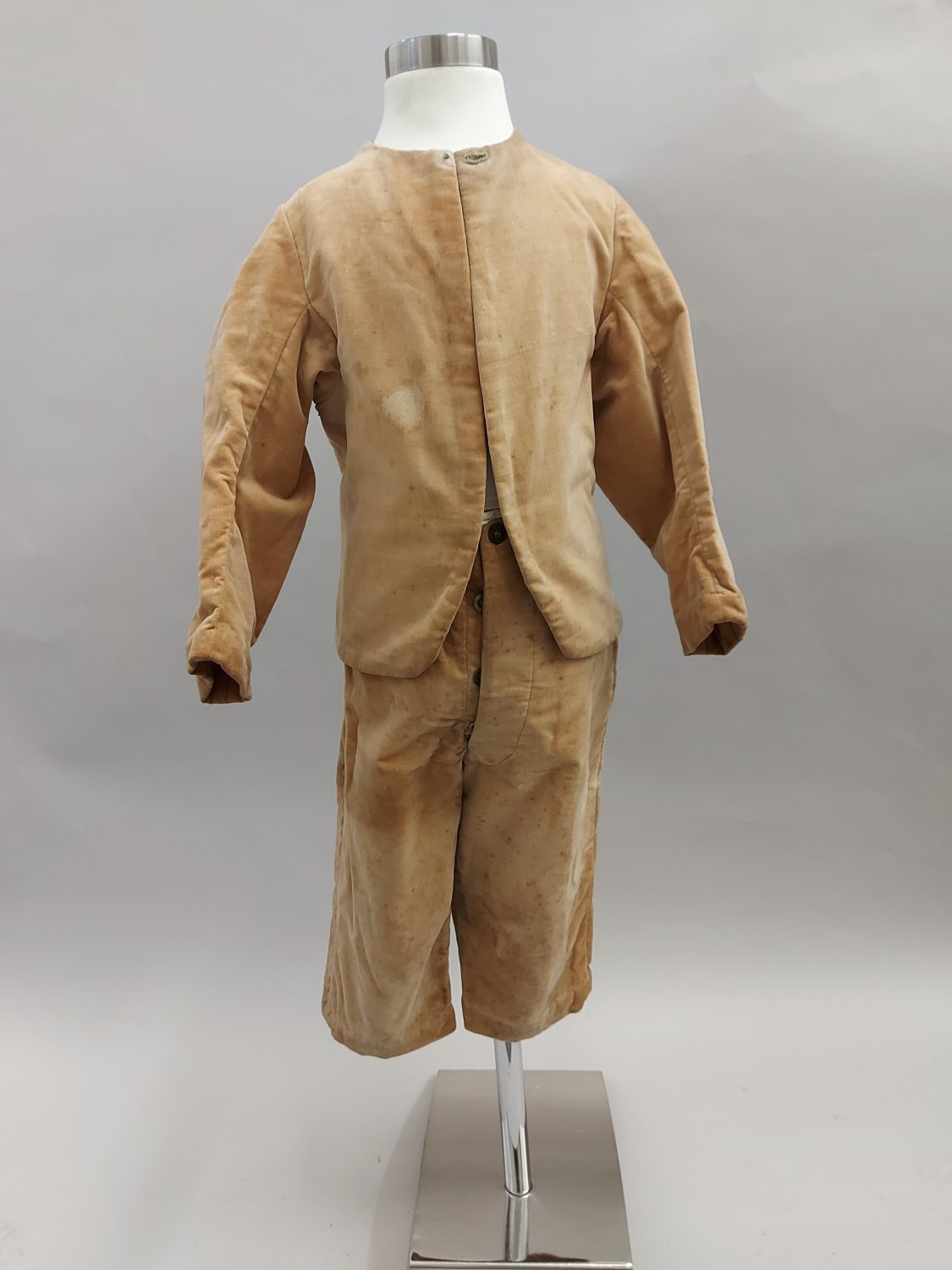 Boys Skeleton suit, consisting of trousers and a jacket. The suit is a dull cream coloured crushed velvet speckled with lighter and darker spots due to age. The jacket has no buttons but a small hook and eye at the top, 1790 - 1830. Image courtesy of Preston Park Museum and Grounds.

Fashion for both children and adults was different for those at the bottom of society to those at the top. For example, working-class boys would go into trousers much earlier as they would need to be free to walk and would start their working lives as children. Clothes would be repaired, patched, and darned as much as possible and handed down through the generations. They would have been made of hardy materials with little or no decoration. This would be the same case with girls who would try and follow the lowering the hem line tradition if they could afford the extra material.

For the upper classes there were much more options in terms of materials and accessories. Little girls would wear long knickerbockers under their dresses fringed with laces and flounces. Tartan was a popular fabric for dresses and velvet and silk dresses would be worn for Sunday best. 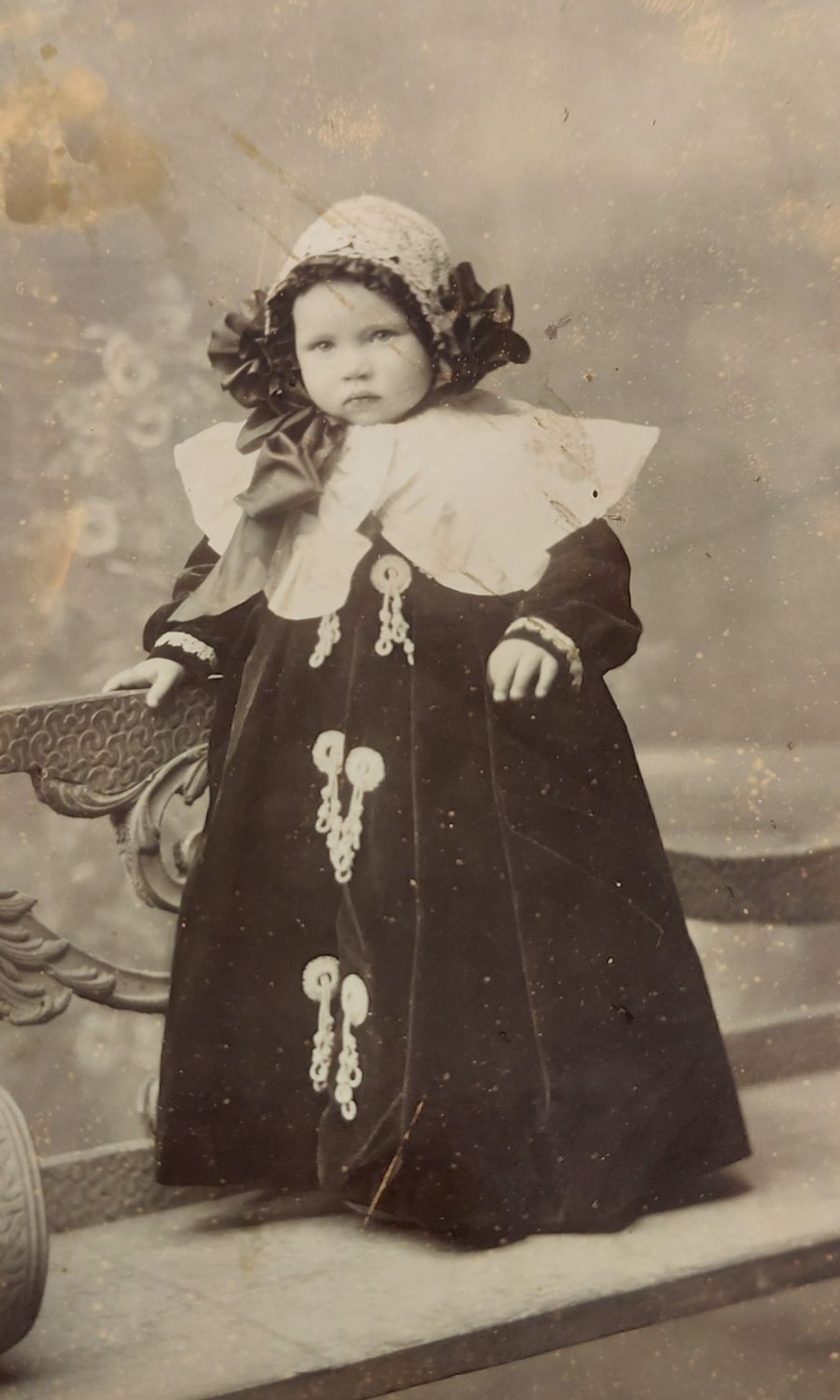 Photograph of a child wearing a long cape like dress in what appears to be a dark velvet. The dress has no shape and features details down the front. A over the top white collar protrudes from the neck and the child wears a fitted bonnet featuring two large ribbons on either side, 1870 - 1890. Image courtesy of Preston Park Museum and Grounds.

Broderie anglaise lace became popular during the mid-Victorian era and was used a lot on children’s clothes. It was popular on Christening Gowns which were very decorative. The gowns featured shoulder frills of broderie anglaise lace, continuing down the bodice to the skirt, often creating a pinafore effect. 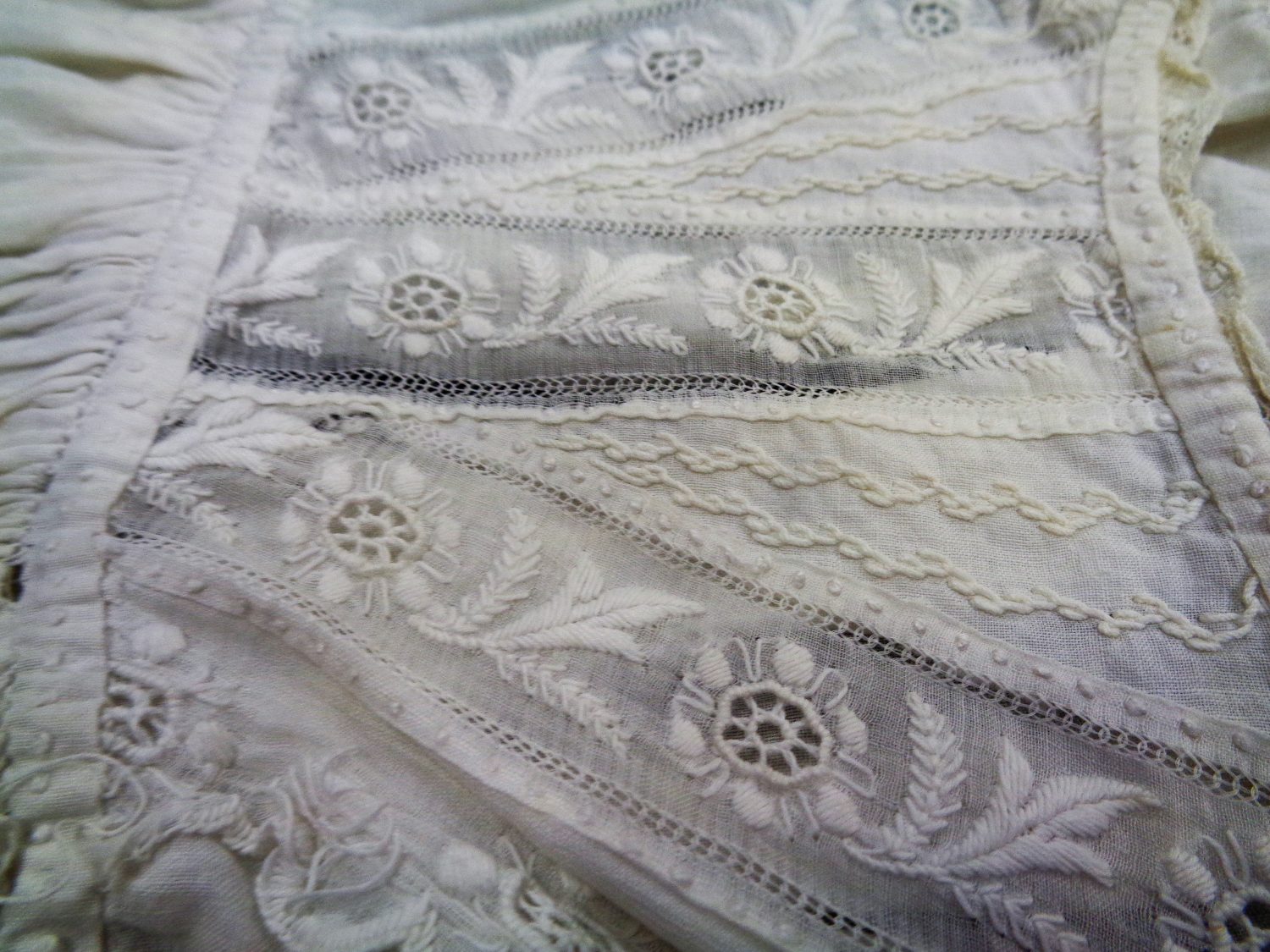 Close up detail of the broderie anglaise lace on the front of a babies christening gown, 1900. Image courtsey of Head of Steam - Darlington Railway Museum.