Interview with a 1914 Policewoman

We asked some of our Police Station volunteers at Preston Park Museum about what it would have been like to be in the police force in the past. 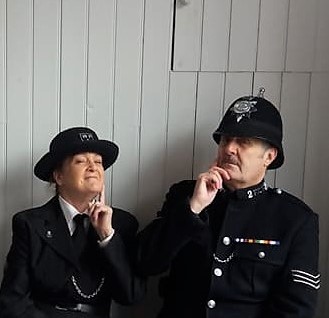 At Preston Park Museum we are lucky to have some incredible volunteers. Recently we asked the Police Station Volunteers to answer some questions as their 1895 counterparts.

First we asked Pauline who is our volunteer policewoman. As a woman, Pauline wouldn’t have been allowed to join the police force in 1895 (the year our Victorian Street is set) however she has given us a brief history of the role of women within the police force and how this evolved over time.

‘Technically I do not fall into the category of an 1895 Policeman but I will give you a brief history of the involvement of Female Police Officers and try and answer as many of the questions as possible:

1903 – The Women’s Social and Political Union (WSPU) – was set up by Emmeline Pankhurst.

1914 – Margaret Damer Dawson and Nina Boyle founded the Women’s Police Service (WPS) which is where I come in.

Initially Policewomen were trained in marshall arts and were not issued with truncheons or handcuffs. Patrolling in pairs we could apprehend but not arrest criminals. All we had was a police whistle to alert nearby Policemen to make the arrest.

In 1925 Edith Smith was the first Policewoman to be given the power of arrest. She was also given a half-size truncheon to fit in her handbag and handcuffs. She was based in Grantham Police Station, Lincolnshire and with an Air Force base nearby, her main objective was to control and erase lewd behaviour, as the town attracted many young women seeking the company of men in uniform. She was so successful the women gave up and left town!

This was the main function of Policewomen apart from looking after female prisoners, moving on prostitutes, looking after lost children, lost dogs, traffic control and making tea!

You had to be a certain height (much taller than me), be alert and intelligent, pass the martial arts training, wear the uniform (long black skirt, military style long black jacket with belt, heavy black laces boots (not showing ankles), black stockings, white shirt, black tie, gloves and WPS hat.
We asked Pauline some questions about life as an early policewoman.

What’s your favourite part of the uniform?
It is the hat which defines who you are.

What do you think is the worst part of being a prisoner?
The food and punishment.

Have you ever had to use your baton?
No, but I have been trained to use a baton to apprehend people, but only on key areas of body, such as weak points. But never the head!

What is the worst punishment for a criminal?
The logging and death.

Is your pay good?
Policewomen got paid far less than Policemen.

We were formed in 1914/1915 to help fill the shortfall in Policemen when the men were called up for the 1914 – 1918 war. When the men came back in 1918 we were disbanded but where reinstated in 1920 as it was felt that there was a need for women Police. They continued under several names until they were integrated into the Police Force we know today.