Lady Florence Bell had been a successful playwright in her time, a contributor to the social study of Middlesbrough’s steel workers, and was the step-mother of Gertrude Bell. However she is also remembered controversially for her views on women and her work as an Anti-Suffragist. 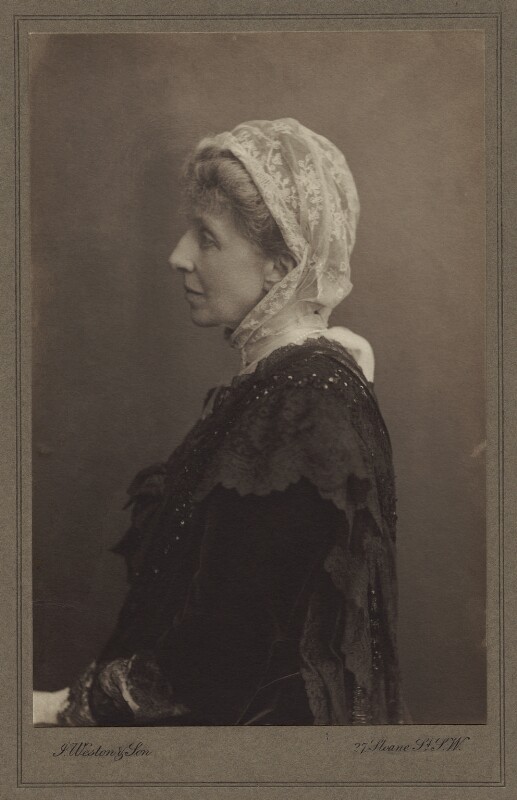 Florence Eveleen Eleanore Olliffe was born in September 1851 in Paris to a wealthy family. Her father, who died in 1869, had been a physician to the British Embassy. The following year Prussian soldiers invaded Paris. Florence and her family were forced to flee, and they started a new life in London.

In 1876 she married Sir Hugh Bell, the Director of Bell Brothers steelworks in Middlesbrough, and moved into the Bell family home, Red Barns in Redcar. Florence provided a good domestic life for her husband and two new stepchildren, Gertrude and Maurice. She and Hugh had three more children together – Hugo in 1878, Elsa in 1880 and Molly in 1881.

Lady Bell was a woman of her time, and had strict ideas for her children’s education, especially her daughters’. Elsa and Molly were raised to be good wives and mothers, and not to aspire to any occupation. Gertrude on the other hand was more excitable and adventurous, and resisted her stepmother’s demands and studied history. (Read about Gertrude Bell’s later exploits here: Gertrude Bell and the Law of Excavation)

As well as her family life, Lady Bell had an interest in the lives of the working class. In 1907 she published ‘At the Works: Study of a Manufacturing Town, Middlesbrough’. It was a highly detailed account of the lives of her husband’s steel workers.

At the time of the book’s publishing, the working classes were viewed badly by the higher classes. They were seen to be unambitious, unhygienic and incapable of looking after their children. ‘At the Works’ details how much of the workers’ wages went into rent, food and coal, and there would not be much left for savings. Many men turned to drinking, and the women were unable to bring themselves to cook and clean on top of taking care of a family. Lady Bell also wrote about how when a steel worker died in an accident at the works the family would be left with little support.

In the conclusion of her book, Lady Bell presented no grand, sweeping solutions to improve the lives of her husband’s workers, such as pay rises or better safety at work. Instead she seemed to fall back into the old middle class way of thinking – she criticized the worker’s use of alcohol and inability to save money, and their wives’ failings in housekeeping.

Lady Bell was not a forward-thinking woman and believed that all women were to be care-givers to their husbands and to have children. The only measures Florence Bell was prepared to agree to in helping the working classes was better education in cookery and how to improve health, and the opening of a recreational hall, the Winter Garden, in Middlesbrough. She was not about to criticize her husband’s work practices, or work towards social elevation. In her mind, the working classes, and women, were to remain in their place.

In Lady Bell’s opinion, working women’s lives were to revolve around keeping a good home and tending to her family. They were not meant to get involved in political discussion and were even believed not to be intelligent enough. She firmly believed that the vote should not be given to a class of people she thought as ignorant.

Around the time ‘At the Works’ was published, the suffragettes were rising up in protest. They targeted men in power and caused damage to their property. The Bell family and their relatives had sometimes been witnesses to these acts and deplored the violence. The actions of the suffragettes somewhat solidified Lady Bell’s views that women were not deserving of the vote.

Both Lady Bell and Gertrude went to great lengths to argue their case – they joined the Anti-Suffrage League and wrote articles for The Times newspaper. Their efforts in the end made little difference when women over the age of 30 gained the vote in 1918.

The Pageant of Mount Grace

As a playwright Lady Bell had penned numerous plays, some of which were performed at London’s West End. In 1921 she had arranged a larger show, the Yorkshire Pageant, and in the following years she began planning another pageant.

Mount Grace Priory had become both her and Sir Hugh Bell’s home in the 1920s after a series of financial problems had forced them to leave their grander home, Rounton Grange. The Priory had come under the ownership of Sir Hugh Bell’s father, Sir Isaac Lowthian Bell, in 1898 and the Manor House had been restored in the Arts and Crafts style.

From 1925 Lady Bell began planning an immense pageant of around 500 performers. A lot of investment went into the Pageant, all while the Bell family were enduring a financial downturn – the death of Sir Isaac Lowthian Bell in 1904 had saddled the family with expensive death duties, and the General Strike of 1926 had a devastating impact on the steelworks. The family fortune was quickly drying up.

Nevertheless, Lady Bell pressed on with the Pageant of Mount Grace. The performance went ahead in 1927, after being postponed a year following the deaths of Gertrude and Hugo. It took place over three days in September to an audience of thousands, and it depicted the Priory’s history, from its founding in 1398 to its dissolution in 1539. Lady Bell was applauded at the end, and it remains one of the last great achievements of her life.