In the weeks before our lives were turned upside down, the ‘Socialites’, a group for visually impaired adults in the Tees Valley began taking part in a series of workshops with artist Suzie Devey at Preston Park Museum and Grounds. 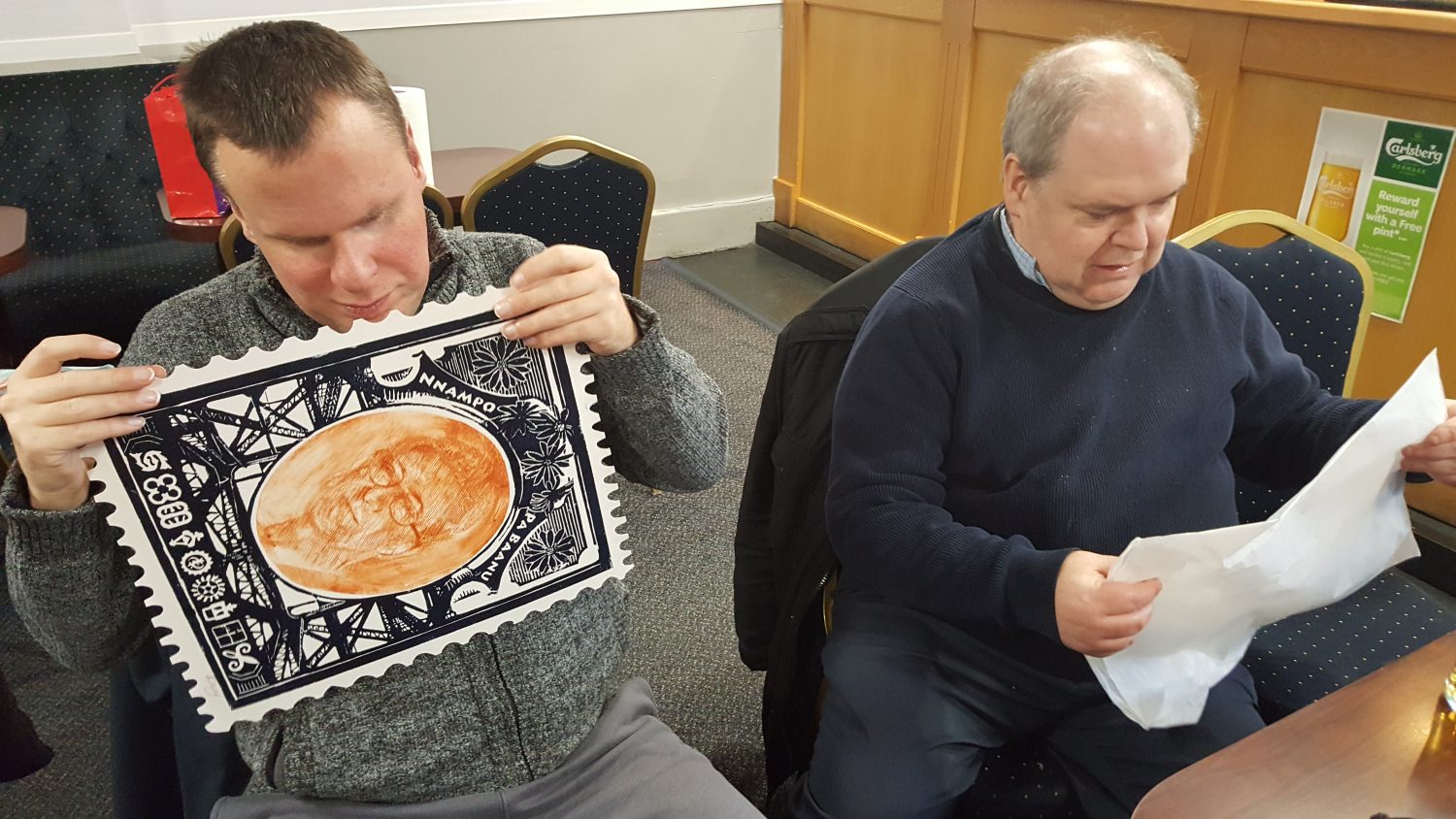 Image: A photograph of two men from the Socialites group exploring the artwork of print maker Suzie Devey.

The ‘Socialites’ are an independent group of blind and visually impaired adults who meet monthly in Stockton to offer people with sight loss a social life. The group had previously visited Preston Park to take part in an English Civil War handling session and were keen to explore the museum further. They were taking part in a series of workshops with artist Suzie Devey exploring the museum and it’s collection to create an exhibition about what the objects meant to them. 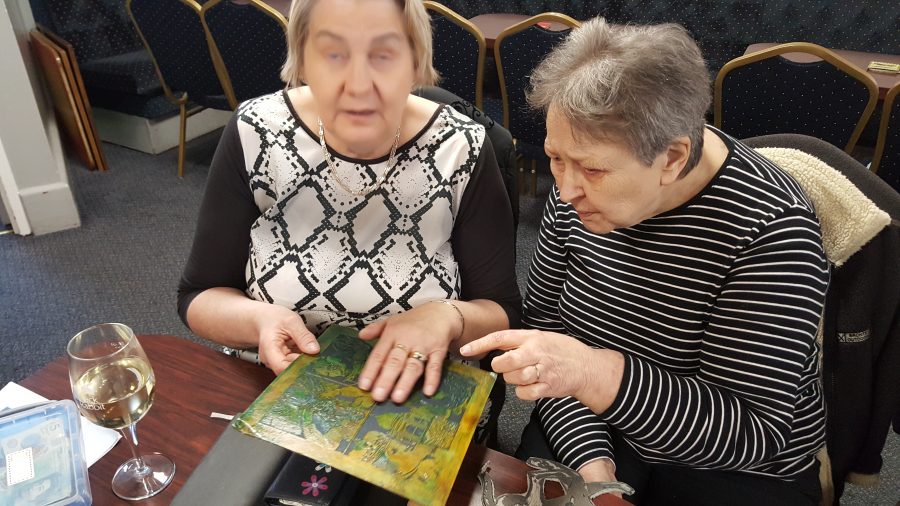 Image: A photograph of two ladies from the Socialites study a printing plate by Suzie Devey, over a glass of wine.

Our first session took place in early February and was held in a pub, the group’s usual meeting place. Suzie introduced the group to printmaking and they spent time exploring the different materials, tools and techniques used to create different types of prints. The group were asked if they would like to take part in a series of workshops exploring objects within Preston Park and then create their own printed artwork to be included in an exhibition later on in the year. 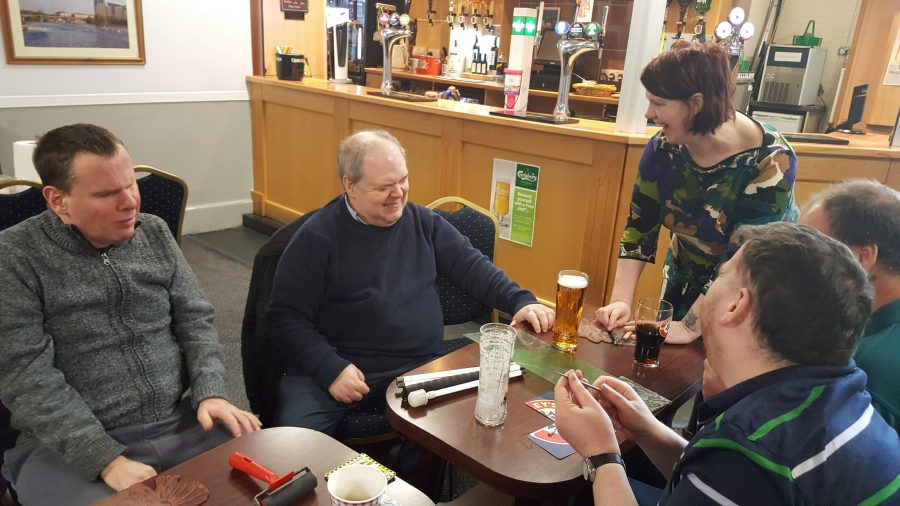 Image: A photograph of four members of the Socialites group sit around two tables in a bar whilst meeting print maker Suzie Devey.

For the following session the group visited Preston Park and were given an audio-described tour of the museum by one of the Visitor Assistants. During this tour they were told about a Bridget Riley artwork that was on display and we realised how difficult it was to accurately describe this piece to the group. Suzie was inspired to recreate a touchable version of this and a number of other Bridget Riley artworks to enable the group to enjoy the art further. Watch a film from Suzie explaining how and why she created the pieces here.

In the next session the group were creating an embossed interpretation of their objects. Suzie asked them to think about what they felt, sensed and wondered about their object. They were asked to free draw it, just take the pencil and draw whatever shapes they felt represented the object and their feelings towards it. As is the case when you ask adults who probably haven’t drawn since they were at school, quite a few were a bit anxious about this task, however all had a go. 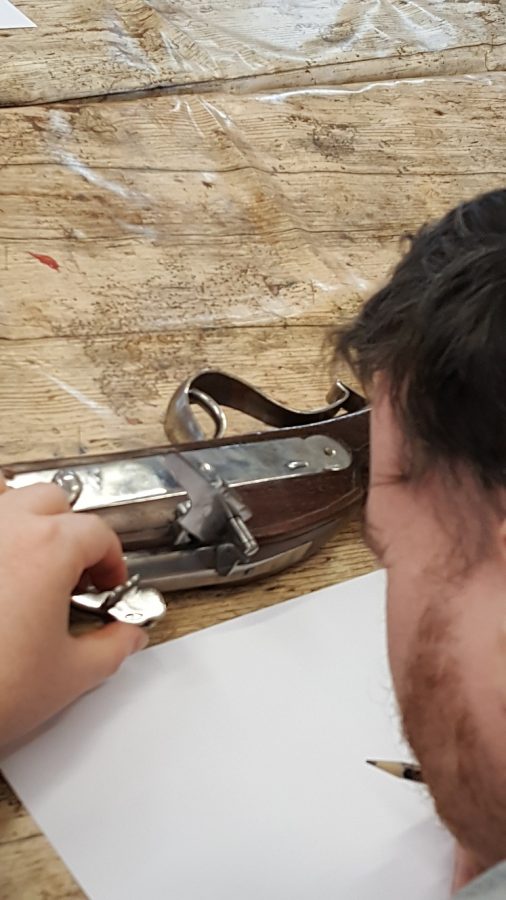 Image: A photograph of a member of the Socialites group looks closely at the trigger and lock part of a musket ready to draw it.

After this they were asked to cut out the shapes they associated with their objects. Again, this caused a little bit of concern for some, particularly as the card was quite thick and was quite difficult to cut. Some of the group had not used scissors for a long time, with one person feeling immensely proud as this was the first time they had used scissors in their life. 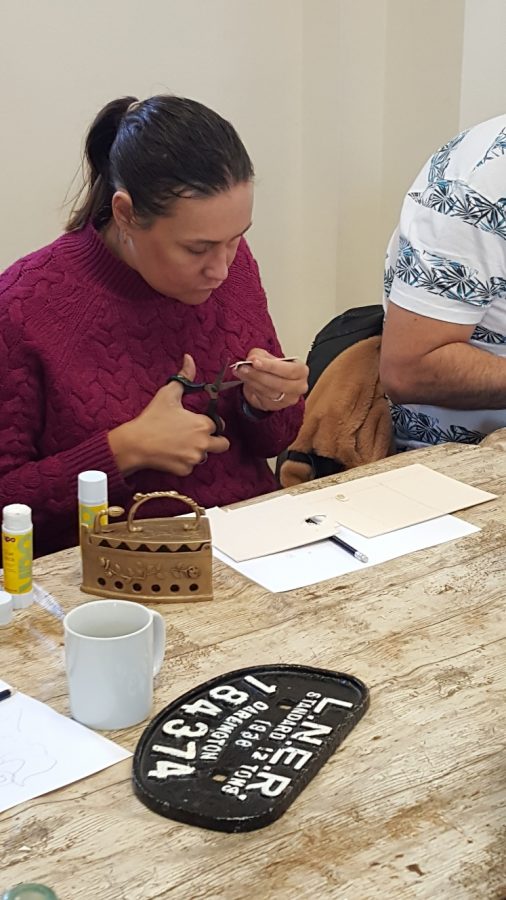 Image: A photograph of a lady from the Socialites group cutting up card to create an embossing plate inspired by a Victorian box iron.

After gluing the cut out shapes onto another piece of card, the group all created their own embossed print using the press. 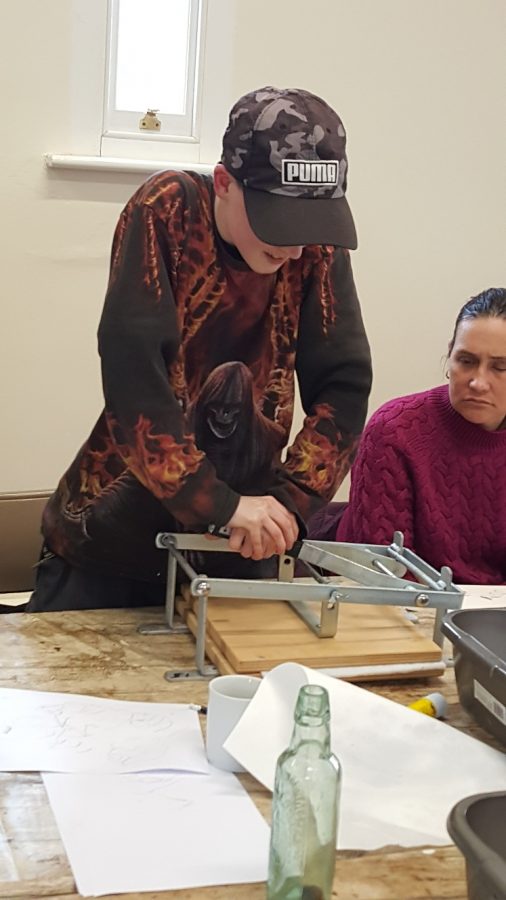 Image: A Photograph of a member of the Socialites group standing at a table whilst using both hands to push down on a press.

Unfortunately, the following sessions where the group were going to use the inks to make their own prints and eventually the creation of an exhibition had to be postponed due to the lockdown. We all hope to continue with the sessions once life returns to some sort of normality. 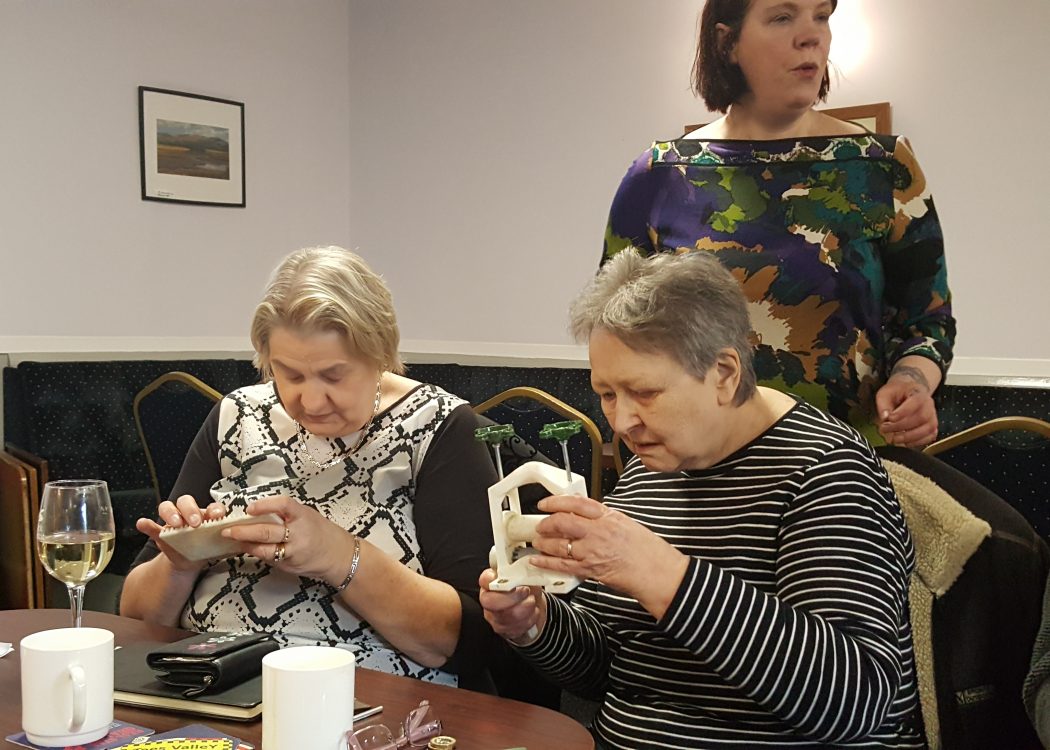 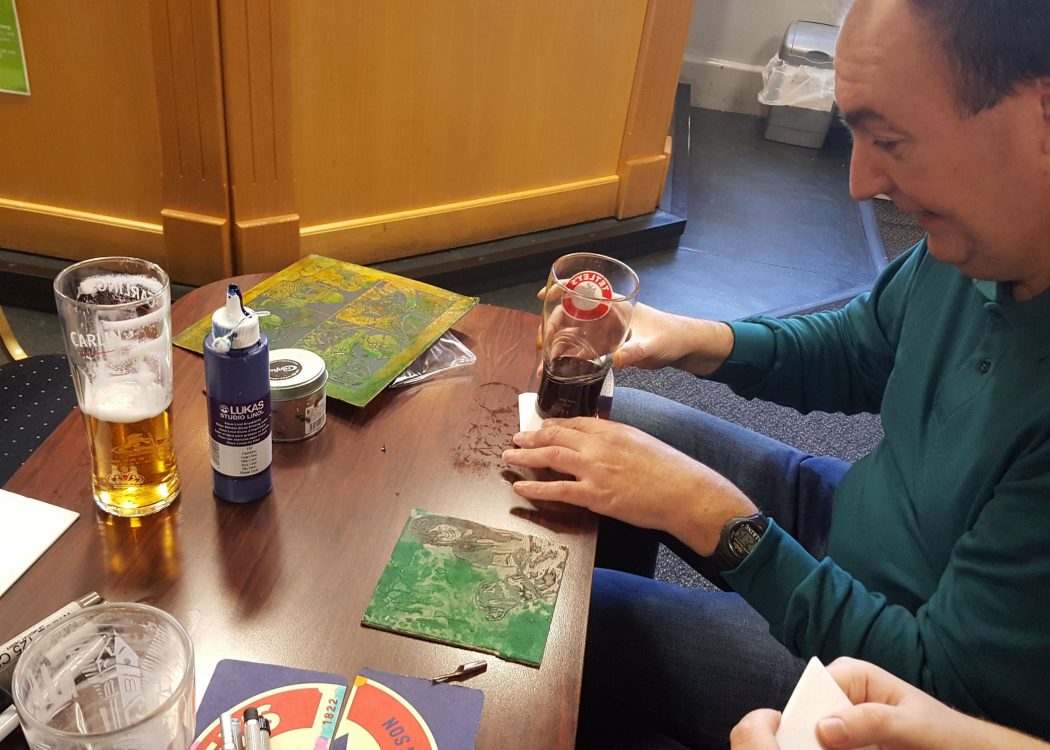 Image: A photograph of a member of the Socialites group enjoying a drink after exploring the etched printing plate, a lino cut printing plate and inks that are on the table in front of him. 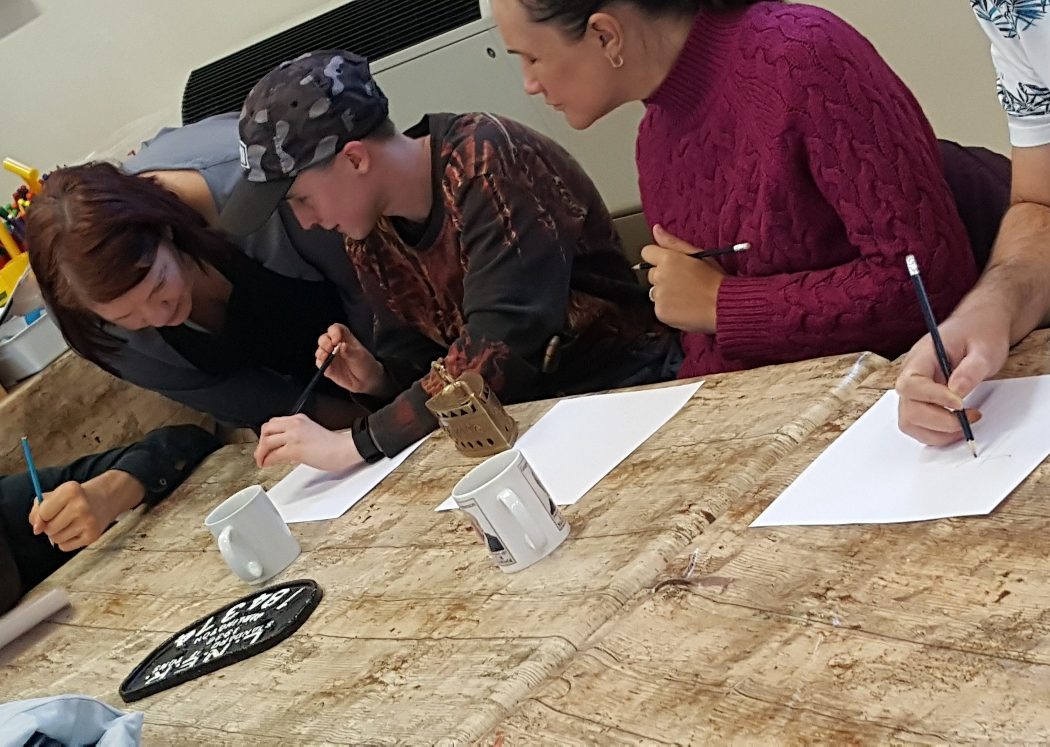 Image: A group photograph of 4 members of the Socialites group free drawing objects during a workshop, guided by Suzie Devey 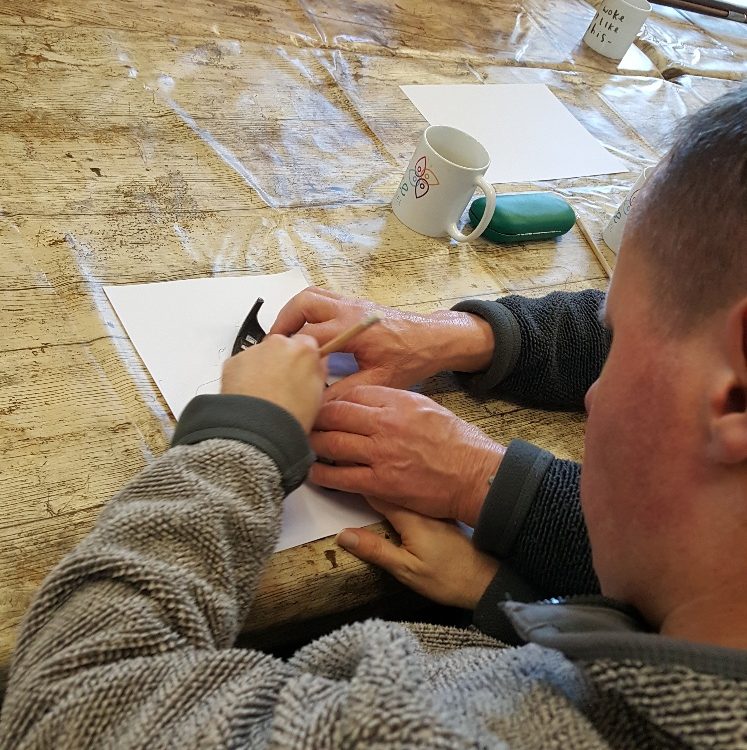 Image: A photograph of man from the Socialites drawing round a Victorian iron plate. 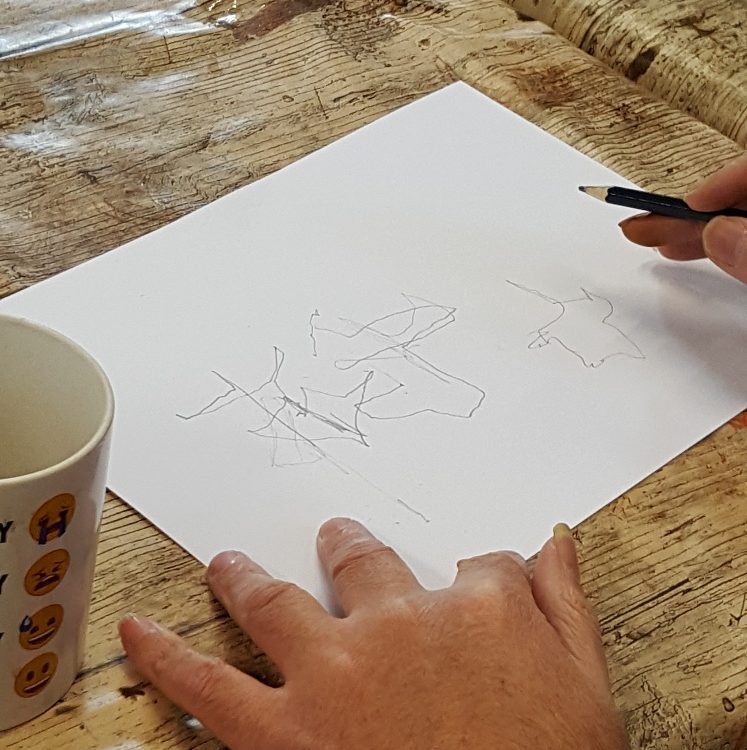 Image: A photograph of a pencil drawing of a pike during a visit to Preston Park Museum by the Socialites. 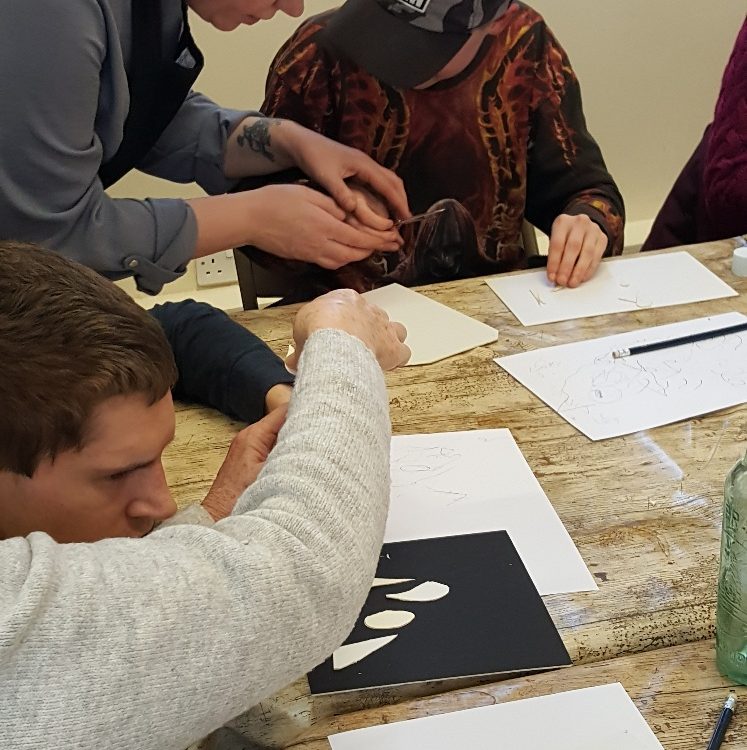 Image: A photograph of Suzie leaning over the table to guide one of the group whilst they cut out their shapes for their embossing plate. Whilst another member is sticking their shapes to their card base. 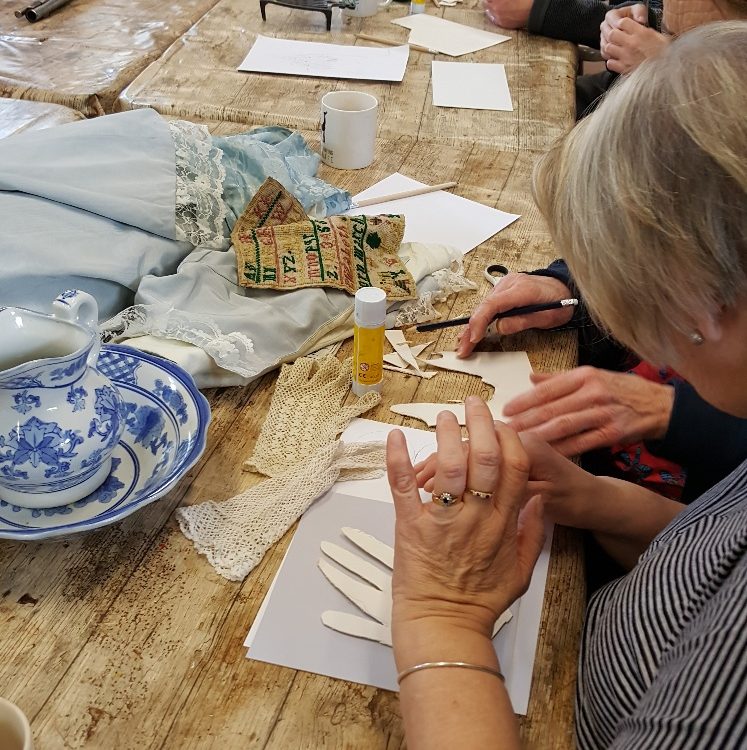 Image: A photograph of members of the Socialites group cutting shapes inspired by objects and sticking them onto card to create an embossing plate.