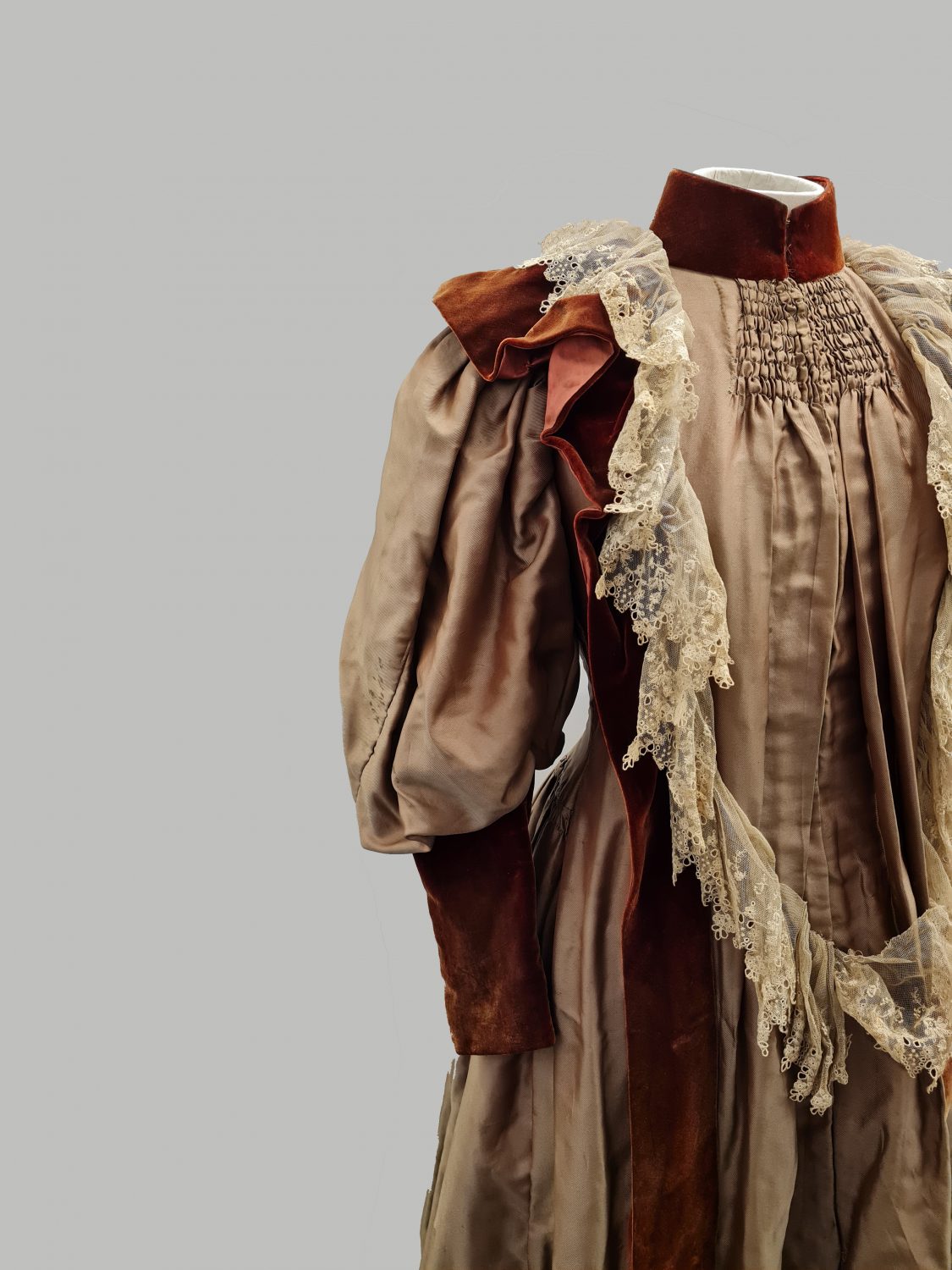 To celebrate London Fashion Week we are highlighting some of the stories in our collections. To kick us off we are looking at the Victorian obsession with tightlacing and the Liberty Dress that fought back against this movement.

In the late Victorian period, the phenomenon known as tightlacing began to rise in popularity, as Victorian women became determined that they and their daughters could be pulled into a corset and tightly laced down to a 16 or 18 inch waist. The process was painful, requiring girls to be kept in their corsets during the daytime, and only loosened by up to two inches during the night.

As tightlacing became more popular in the late Victorian period, a small group of men and women rebelled against the fashion, deeming it frivolous and unsafe and denouncing them as tools created to control women and hinder progression. The health risks, it was claimed, included damaged and rearranged internal organs, infertility, and general bad health. Even so, supporters of the corsets claimed it helped encourage good posture and came with its own pleasures. Tightlacing kicked off a debate that gripped Victorian society, known as the Corset Controversy. 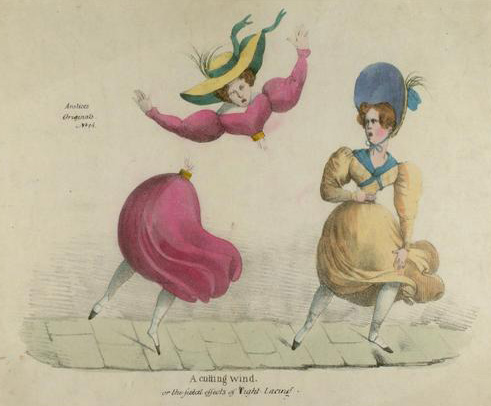 A cutting wind, a satirical cartoon about the risks of tightlacing. The cartoon shows two women in tight-laced dresses, ones drees is so tight she has snapped at the waist and her torso is flying off! Image courtesy of Bodleian Libraries.

In the midst of this arose the Rational Dress Movement, a group of largely middle-class people who had been involved in early feminist groups in the 1890s. The idea, as the name implied, promoted clothing that simply made sense. This movement succeeded in making subtle changes to some women’s fashion, although changes in underwear was the most successful aspect of this.

A key ideal of the movement was that clothing should not put any pressure on the body, meaning that the discomfort of tightly fitted corsets was the first to go. Dresses could be differentiated by their looser waists, flowing sleeves and flounces of lace that looked graceful and beautiful. The dresses were made simply but remained fashionable, as they were also meant to look the same as ordinary clothing. Despite this not many women adopted the style due to the risk of being mocked.

Preston Park Museum, however, has one dress in its collection that abides by the rules of the Rational Dress Movement. 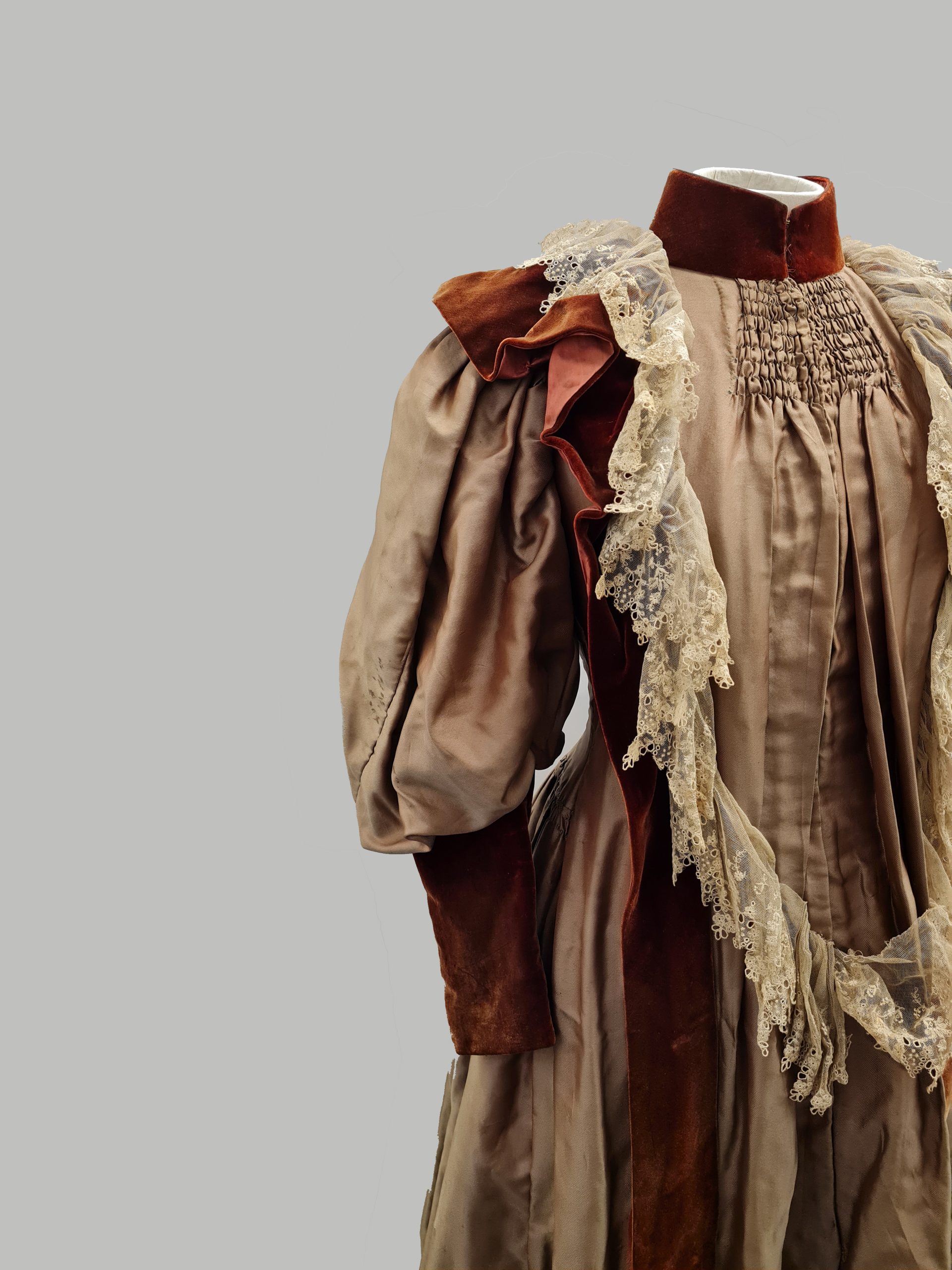 The first owner bought this gold and red shot-silk dress for £13 and 13 shillings, equivalent to £1656 today. In comparison, a working class family of five in the Victorian era would have a modern equivalent of £5 to spend on everyone’s clothes for a whole year. The bodice of the dress is not boned and there is no indication that the dress was worn with a corset. It is likely that the dress was worn with an ‘emancipation waist’, an undergarment commonly worn by women in the Rational Dress Movement which distributed the weight of the underskirts evenly to take pressure off the woman’s hips. The lack of boning and a corset makes the dress easy to breathe and move around in, and the flat front is very different to the tightly pulled in wasp-waist that was typical of 1891. 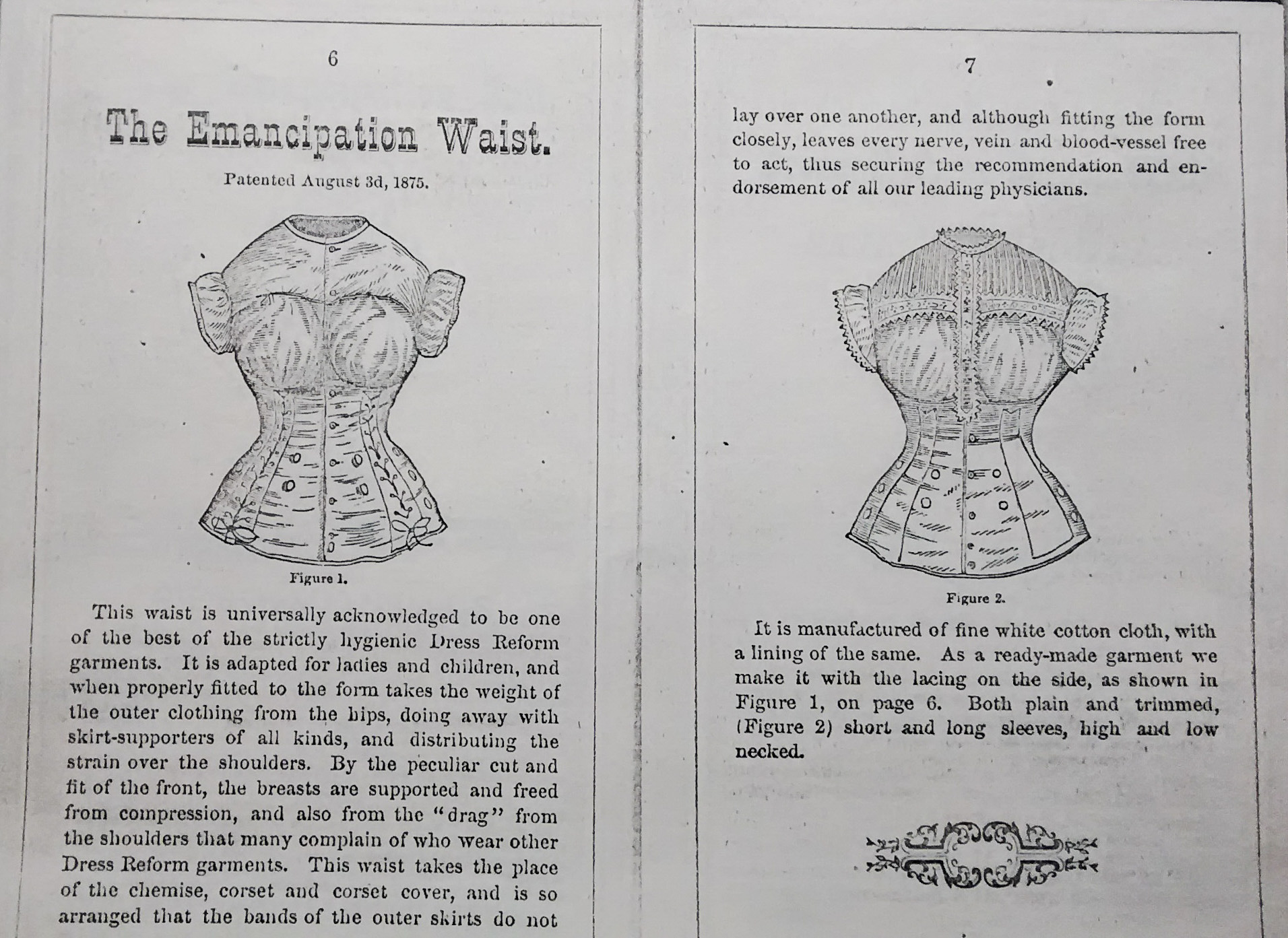 The Emancipation Waist advertisement showing a full length corset style top with less construction and boning. The waist is bigger than the fashion at the time to help womens health. 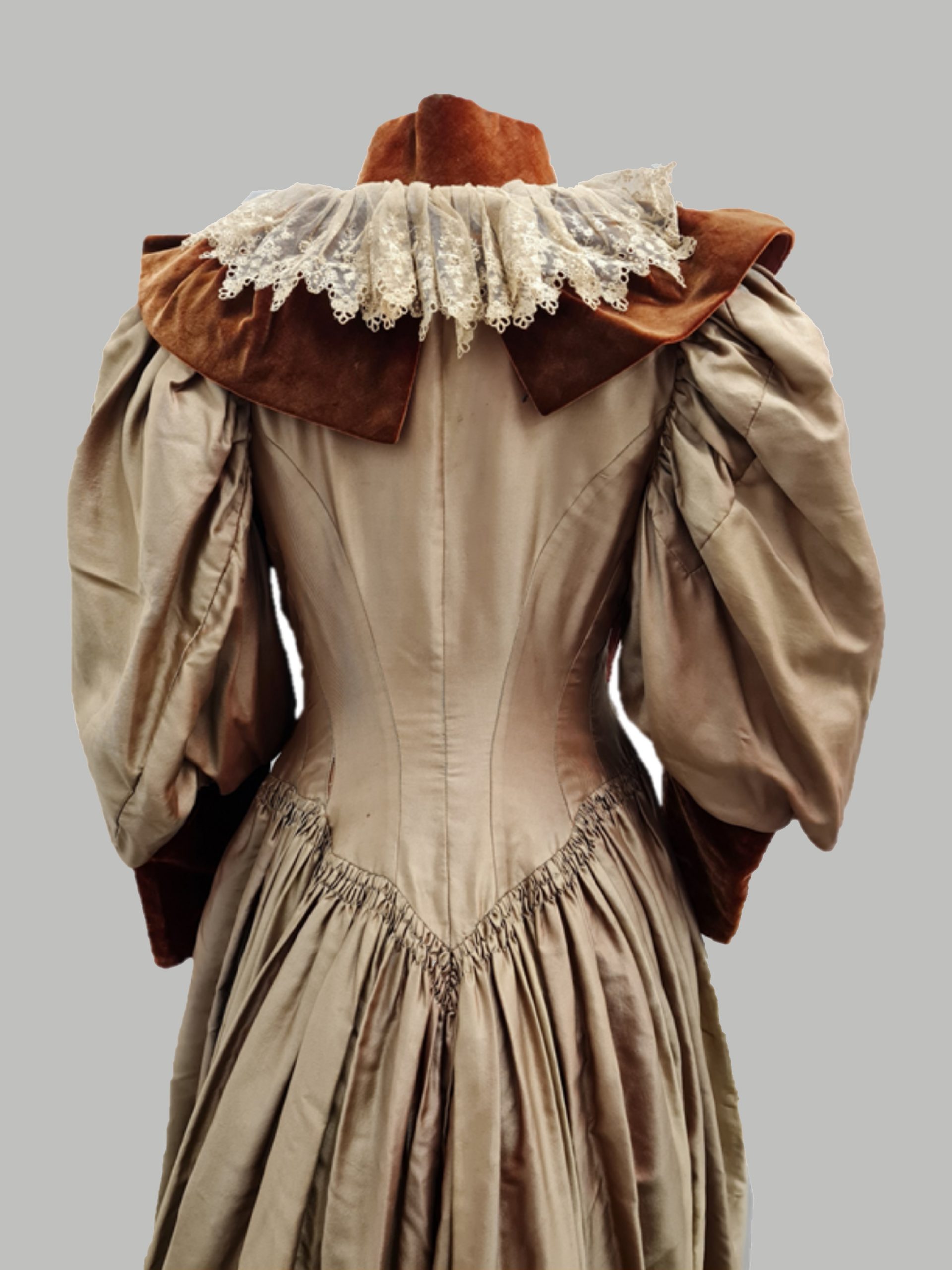 The back detail of the liberty dress, highlighting the fuller, loose waist. Image courtesy of Preston Park Museum and Grounds. 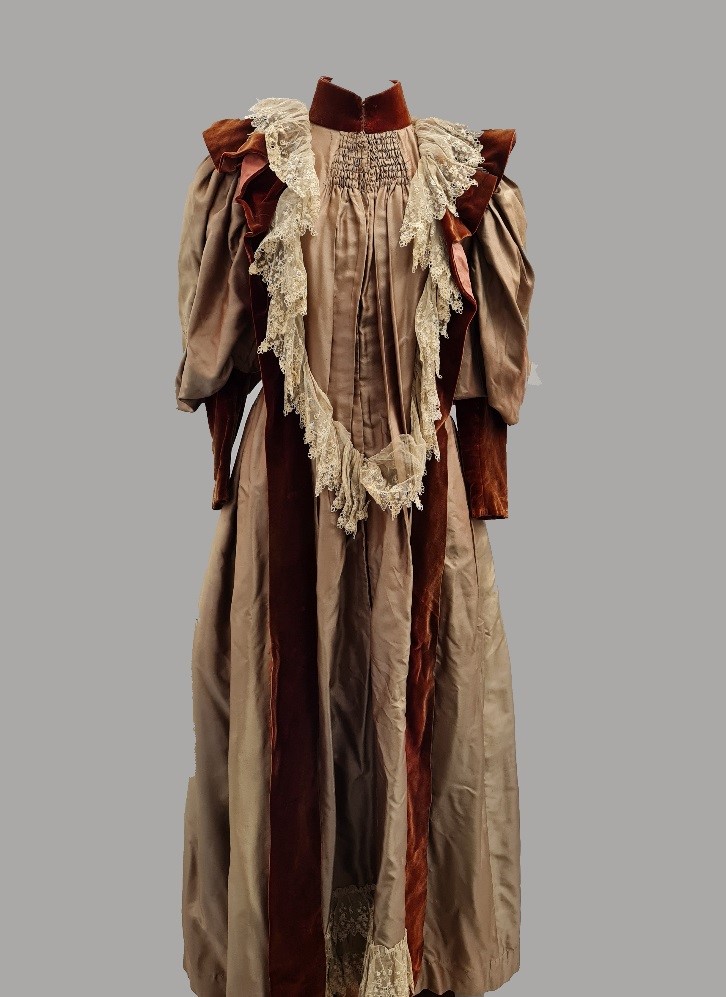 The full length of the liberty dress, designed to be a more healthy and comfortable fit for women. Image courtesy of Preston Park Museum and Grounds.

The dress has many features which mark it as part of the movement, including the dramatic sleeves and long piece of lace that adorns the front. Though fitted, it is not rigid, with gentle tailoring giving the dress a flattering shape and following the natural lines of the wearer’s body. With a waist that measures a breathable 34 inches, this dress is a far cry from the Victorian ideal of an 18-inch waist.

It is a dress that hearkens back to a simpler time, its deep red velvet and soft golden silk matching well to the Movement’s ideal of a long and loose dress that is comfortable to its wearer, yet remains fashionable. The woman who wore this dress would be unusual in her willingness to ditch the corset, something which most women in the country did not do until the 1920s.

Since Bridgerton smashed Netflix’s streaming records in December 2020, online searches and purchases of corsets are at an all-time high, even though Regency corsets are very different to the Victorian corsets that the show made popular. Vivienne Westwood included a denim corset in her Spring 2021 collection, just months after the show aired and after corsets had made a comeback in London Fashion Week 2020. With the next LFW starting today, we have to wonder if there’ll be any featuring in this year’s designs!

This blog has been guest written by Niccole Di Cicco, Collections Assistant at Preston Park Museum and Grounds, who works with their extensive clothing collection.