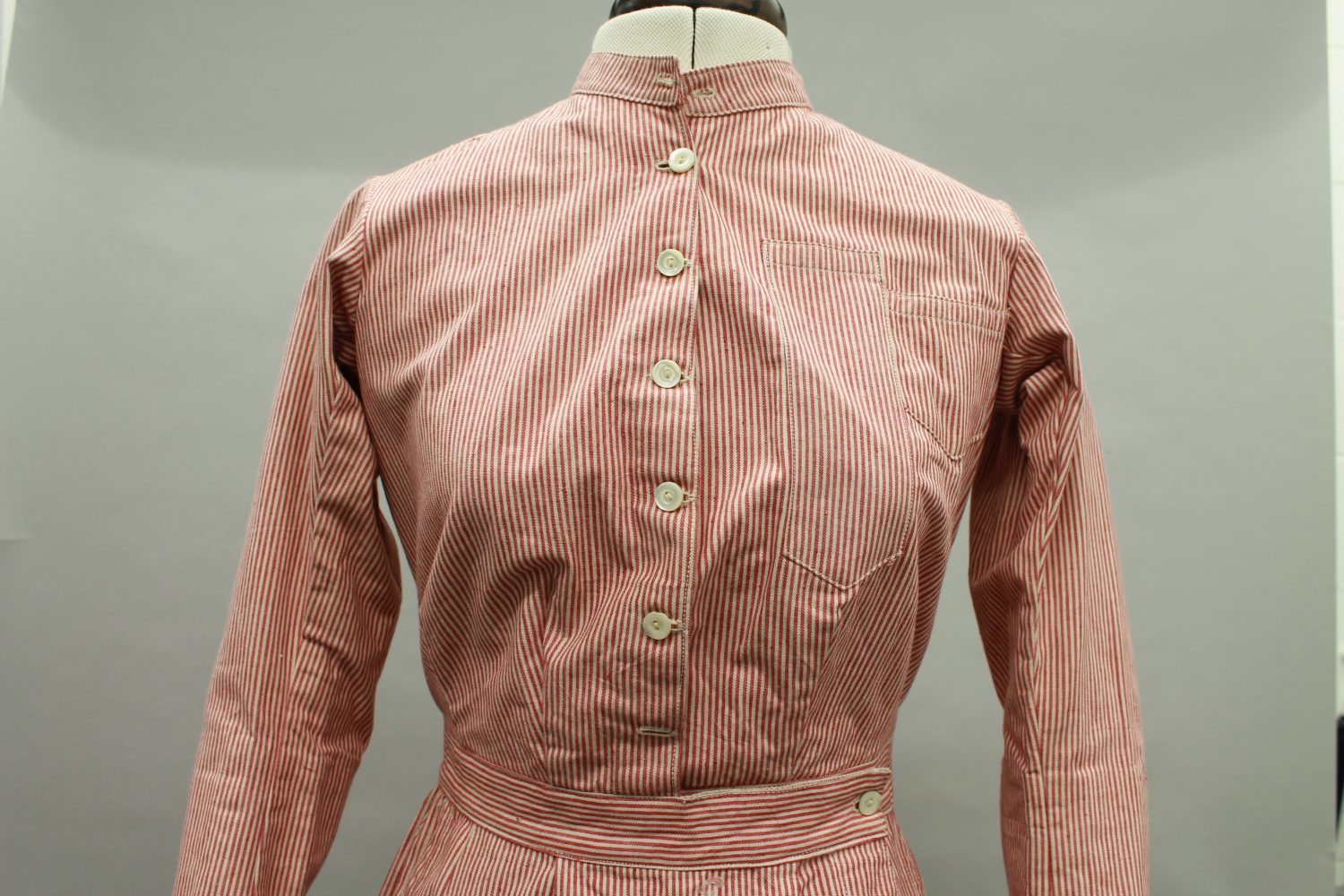 A look at the top half of a 1910s maids dress. Image courtesy of Preston Park Museum and Grounds.

At the turn of the 20th century over a million women were in domestic service. The work was physically hard with long hours and poor wages. Girls started in service as young as twelve and would stay in service until they married. These girls would have come from the working classes and its unusual for clothing to survive from these women because they would have seen so much toil in their working lives.

This dress is one of two domestic service dresses kept in the collection at Preston Park Museum and Grounds. It’s a heavy garment made from red and white striped cotton twill, a robust material made to take lots of wear and tear. It has 6 pearl buttons down the front with a high neck fastening. 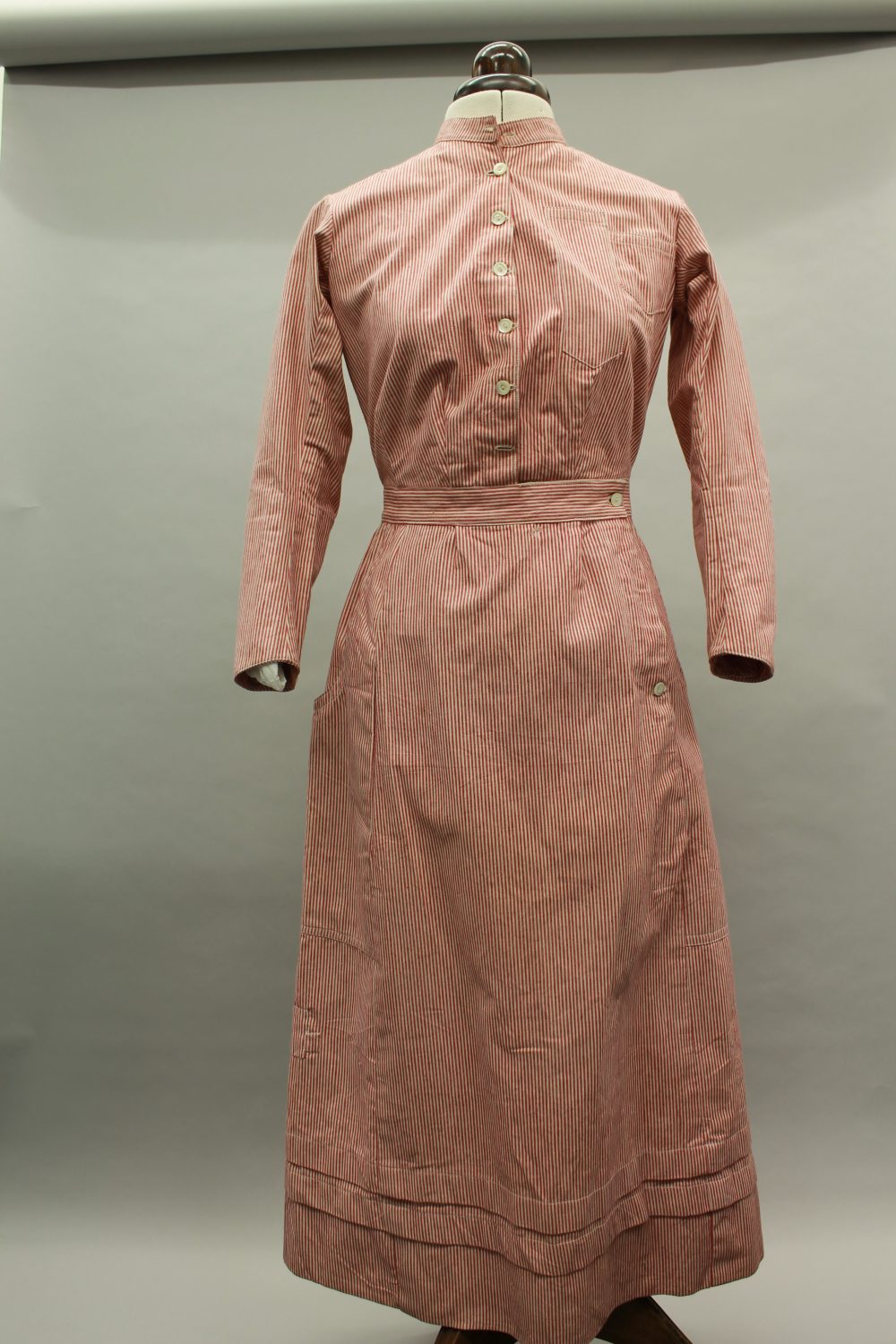 There were many different types of domestic servants during the Edwardian era but one of the most common was the ‘maid of all work’. This maid would be serving a household that was just one step up on the social ladder than herself. She would live in the house and do all the cleaning and cooking. The hours were incredibly long and physically demanding on the body.

Until the First World War most domestic servants would have to buy their own uniforms, however the war was instrumental to changing the system. During the war many women where tempted away from their domestic jobs to go and do war work, such as working in munitions factories where the freedom and wage increase was a revelation from most of these women. 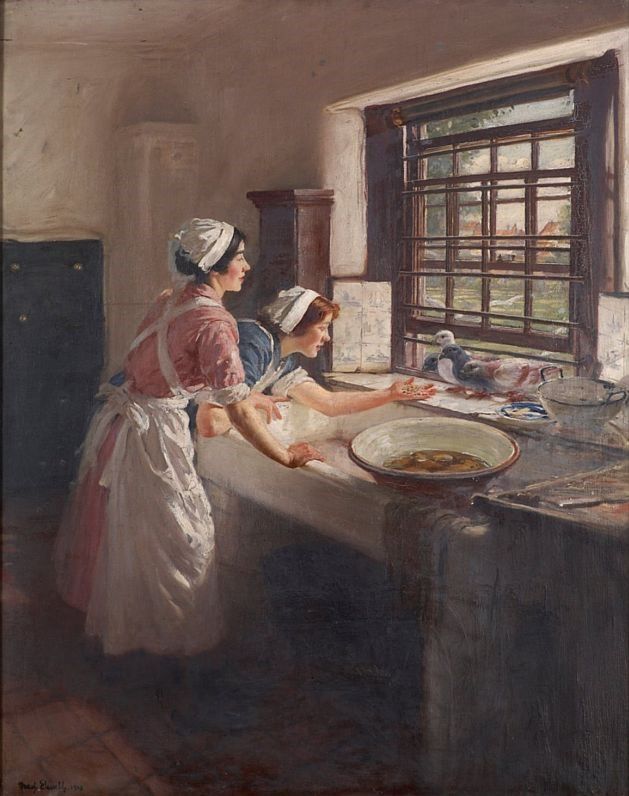 Maids with Pigeons (1916) by Fred Elwell (English, 1870-1958). In this painting by Elwell you can clearly see the colourful uniforms of the kitchen maids.

To try and get women to come back to domestic work employers started advertising that they would provide a uniform. Usually a domestic servant would have two uniforms. One like this which would have been worn ‘behind the scenes’ to do the bulk of the work such as the laundry, scrubbing the floors and cooking. As well as a more formal uniform, usually a black dress with a pristine white pinafore would be worn during occasions when their employers were entertaining guests.