The Transit of Venus

The aim of Captain Cook’s first voyage was to witness the Transit of Venus across the Sun in 1769. At the same time Captain Cook observed the Transit in Tahiti, a local North Yorkshire gentleman did the same from England. 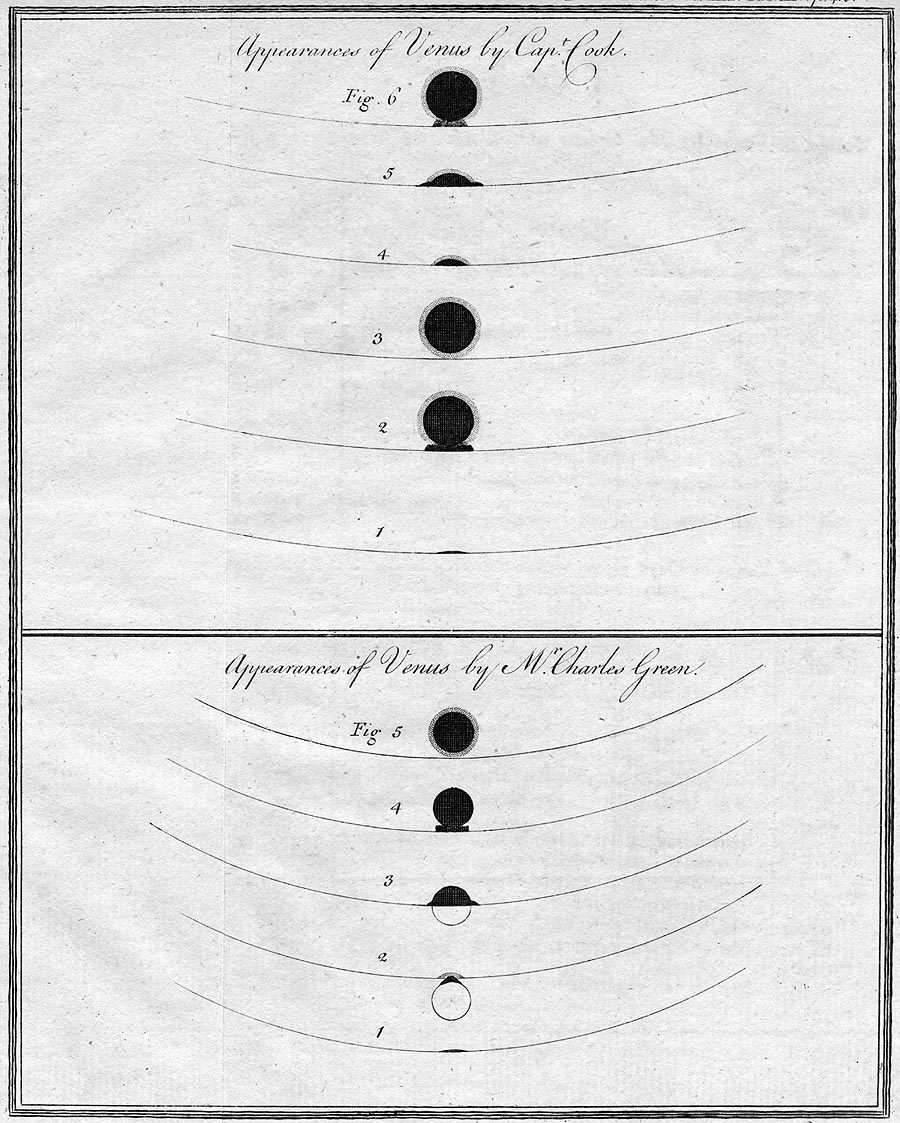 On 12th August 1768, Captain James Cook and the crew of HMS Bark Endeavour, including a team of scientists, set sail from Plymouth Harbour to arrive at Tahiti the following year. Their aim: to observe the Transit of Venus in order to determine the distance between the Earth and the Sun.

Venus transits between the Earth and the Sun twice every 120 years or so. Scientists of the time realised it was one of the few ways in which they could calculate the distance between the Earth and the Sun, but the length of time in which each occurred was a problem. The next Transit would not be until 1874, and the last attempt to view the 1761 Transit had ended in failure, so this was the last chance for living scientists to view this important event.

The Endeavour arrived at Tahiti in April 1769, ample time to prepare for the Transit which occurred on 3rd June. After observing the Transit, Captain Cook and one of the ships’ astronomers, Charles Green, made detailed drawings of this spectacular event.

At the same time Captain Cook had observed the Transit, which had been fully visible in Tahiti, a North Yorkshire businessman and land-owner by the name of Ralph Jackson was doing exactly the same from England, from which the Transit had only been partially visible.

Ralph Jackson had kept a daily account of his life since he was 13, and he wrote in his journal on that day:

“[I]… observed (through my reflecting telescope), the Transit of Venus over the Sun’s Disk, she came on about four minutes after seven, & went down with the Sun.”

Jackson had been born in 1736 to a modestly wealthy family from Richmond, North Yorkshire. When he was 13, he undertook a seven year apprenticeship with a member of Newcastle upon Tyne’s Company of Hostmen. The Hostmen were a cartel of businessmen who controlled the export of coal from the River Tyne, and as a result enjoyed an elevated social status and position of authority in the town.

Jackson worked as an assistant to his Master and was tutored privately. He excelled in his apprenticeship to the point where, in his final year, he was undertaking most of a Hostman’s roles, with the exception of finalising coal agreements with ship’s captains. Jackson was most likely set to join the Company of Hostmen, but his life was to take another turn.

At the end of October 1756, Jackson visited his family in Richmond and met his uncle, Ralph Ward, in Guisborough. He wrote in his journal that his Uncle had made arrangements for him to live and work with him once his time with the Hostmen had ended. After a few months, Jackson finished his apprenticeship in Newcastle and left for good.

Jackson lived with his uncle from December 1756. He was part owner of the Boulby Iron Works and he taught Jackson about the process of alum manufacture. Jackson also went out of his way to acquaint himself with the Cleveland area of North Yorkshire and to build his business acumen, his business partnerships and his network of friends.

When Ralph Ward died in 1759 he left all his property to his nephew. Jackson aimed to set himself up as a country gentleman and bought himself an estate at Normanby, eight miles from Guisborough where he had lived until May 1770. He lived much of his life as a magistrate and had a wide circle of well-to-do friends, which enabled him to become acquainted with Captain James Cook. He even wrote of one occasion in which he met Captain Cook, on December 26th 1771, while Cook was staying with Jackson’s brother in law.

When Ralph Jackson died in 1790, he was succeeded by his only son, William Ward Jackson, who in turn fathered a son in 1806, Ralph Ward Jackson, the man credited as the founder of West Hartlepool.