The design and building of lifeboats began around the 1780s, and it was at this time that a pioneering boatbuilder made the first lifeboats, one of which was the Zetland. 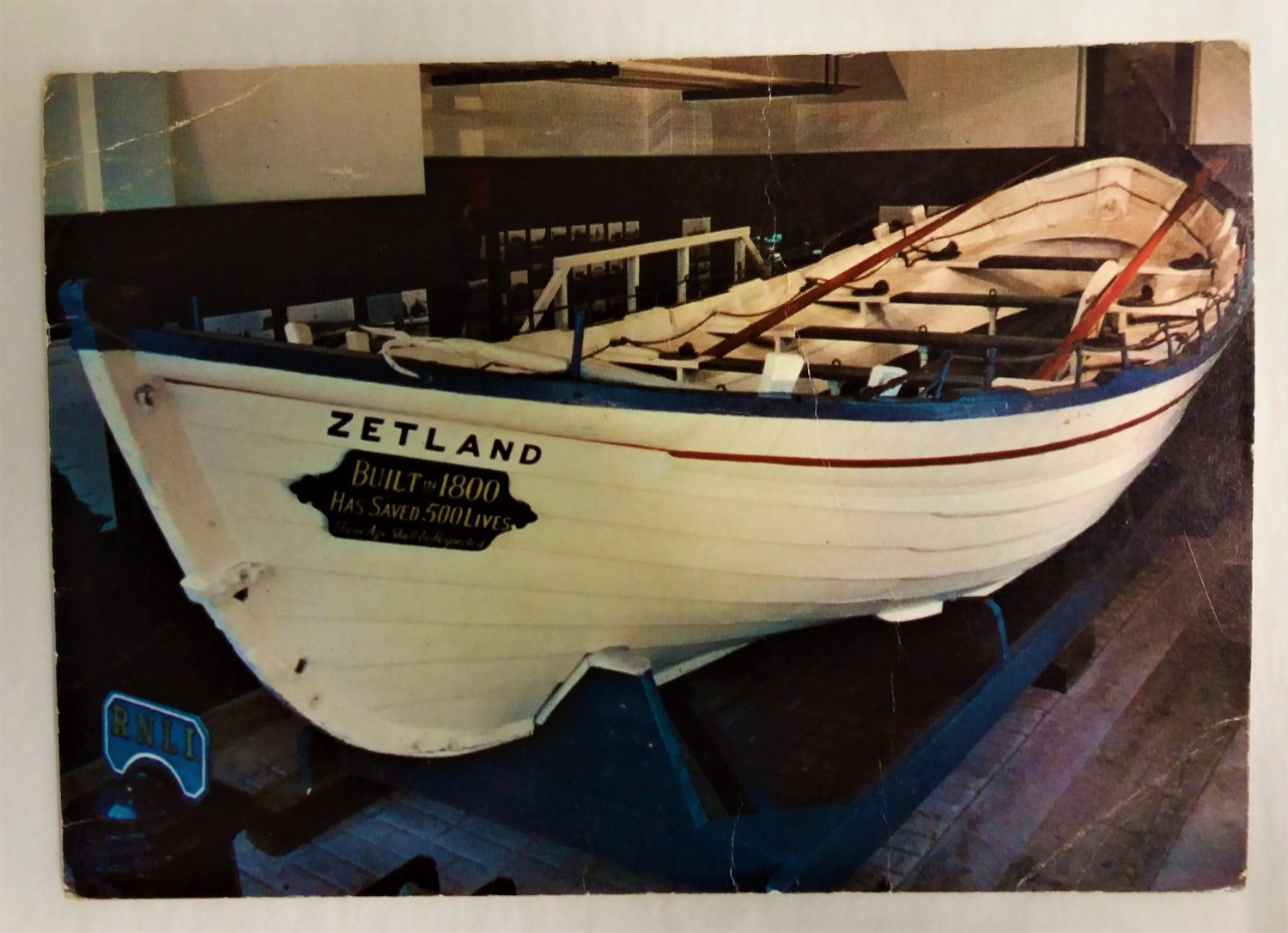 Postcard of the Zetland Lifeboat. Image courtesy of Kirkleatham Museum.

The Zetland Lifeboat was built by Henry Francis Greathead in 1802. Greathead had been trained as a boat-builder and had set-up his own business in South Shields in 1785. Four years after establishing his business a ship, the ‘Adventure’, was wrecked just off the coast of South Shields. Due to weather conditions, it had been impossible for rescuers to get to the ship and the crew drowned.

As a result of the tragedy a local attempt was made to design and build a lifeboat suited to carrying out rescues. Greathead put in his design, and while his initial plans were rejected, the Committee running the project instructed him to make a lifeboat from their own designs.

Greathead made 31 lifeboats in his lifetime, and the 11th one he built was stationed at Redcar and named after the Marquess of Zetland. Greathead was always willing to share his plans with other boatbuilders who wanted to make lifeboats and he never patented his design. 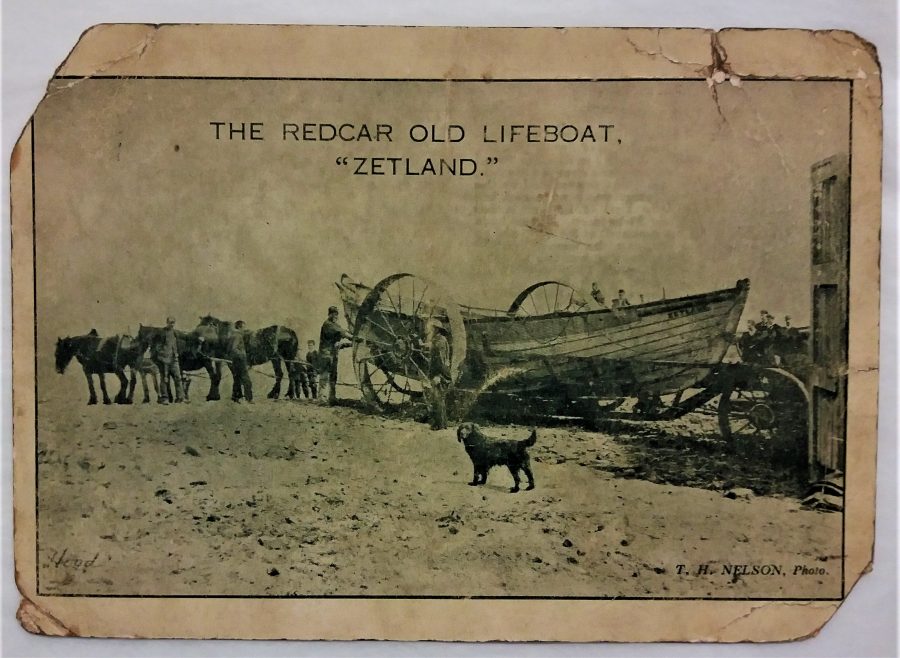 Postcard of the Zetland Lifeboat. Image courtesy of Kirkleatham Museum.

Throughout the 78 years it was in service, the Zetland rescued over 500 lives, and there are some stories of the lifeboat’s more famous rescues.

On 15th November 1854 a brig named the Jane Erskine ran aground off the coast of Redcar. At first a rescue was attempted by 26 fishermen who tried to refloat the brig with their own fishing boats. But the weather worsened, and the fishermen found themselves swept out to sea. Shortly afterwards the Zetland launched and remarkably managed to save all members of Jane Erskine’s crew and all the fishermen who had run into trouble. This was perhaps the Zetland’s greatest rescue.

However not all rescue attempts were successful. On Christmas Day 1836 a Danish brig, the Caroline, was wrecked just off the coast. Among the Zetland’s crew members who came to the rescue was a pilot named William Guy. He had been attending mass at a chapel in the town when he heard the call to action and left to take his place in the crew. The weather conditions were not in the Zetland’s favour that day. Sadly, William Guy fell from the boat and drowned, and the Zetland was washed ashore and unable to relaunch. The crew of the Caroline drowned.

The Zetland’s years of service almost came to an earlier end in 1864, when it was damaged while rescuing the crew of a brig, the Brothers. The RNLI deemed the boat unfit for service and arranged for it to be broken up, replacing it with a new lifeboat, the Crossley. The people of Redcar however were furious with this decision and on the day the Zetland was to be taken apart, came together in protest. It was decided that the old lifeboat would be given to the people of Redcar and, if repaired to a suitable condition, could be used as a lifeboat again. Another condition was made that the Zetland could not ‘compete’ with the Crossley.

By 1872 enough money had been raised to get the Zetland repaired. The lifeboat returned to active service for the remaining 1870s, until on 29th October 1880 it was launched on its final rescue. As the result of a storm a schooner, named Luna, struck Redcar pier and split in two. The Zetland launched alone, since the Crossley and another lifeboat, Emma, were attending to other rescues, and successfully rescued the Luna’s crew. 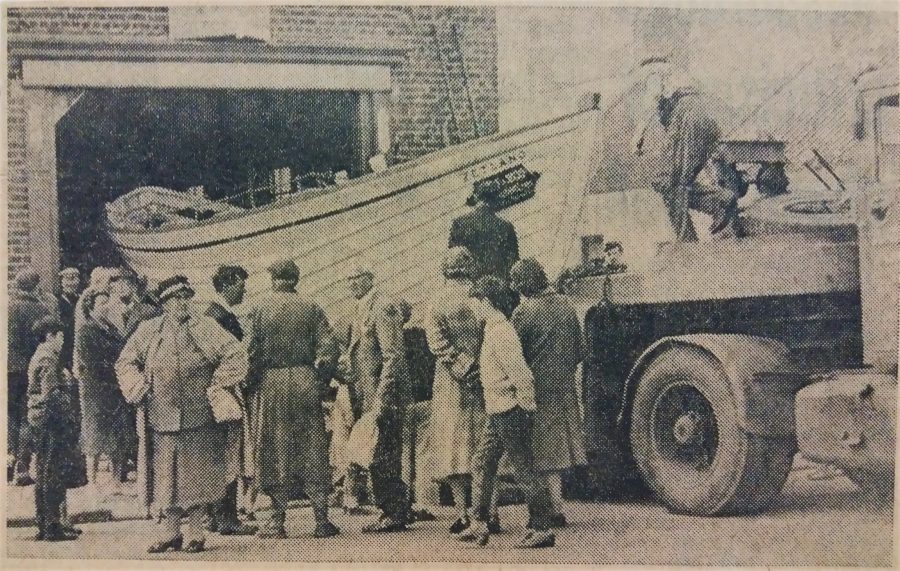 Newspaper image of the Zetland Lifeboat being taken to Edinburgh in 1963. Image courtesy of Kirkleatham Museum.

The Zetland was kept intact long after its final rescue, and in 1963, after turning 150 years old, was selected to be part of the ‘International Lifeboat Conference’ in Edinburgh. It was acknowledged to be the oldest surviving lifeboat in the world, a title which it still holds to this day. The Zetland is now kept at the volunteer-run Zetland Lifeboat Museum in Redcar.