The Clephan Collection is the largest collection of artworks kept at Preston Park Museum and was bequeathed to Stockton Council in the 1930s. Unusually for an art collection, it was donated by two women and includes paintings by at least nine women artists. This first part looks into four of the women artists of the collection. 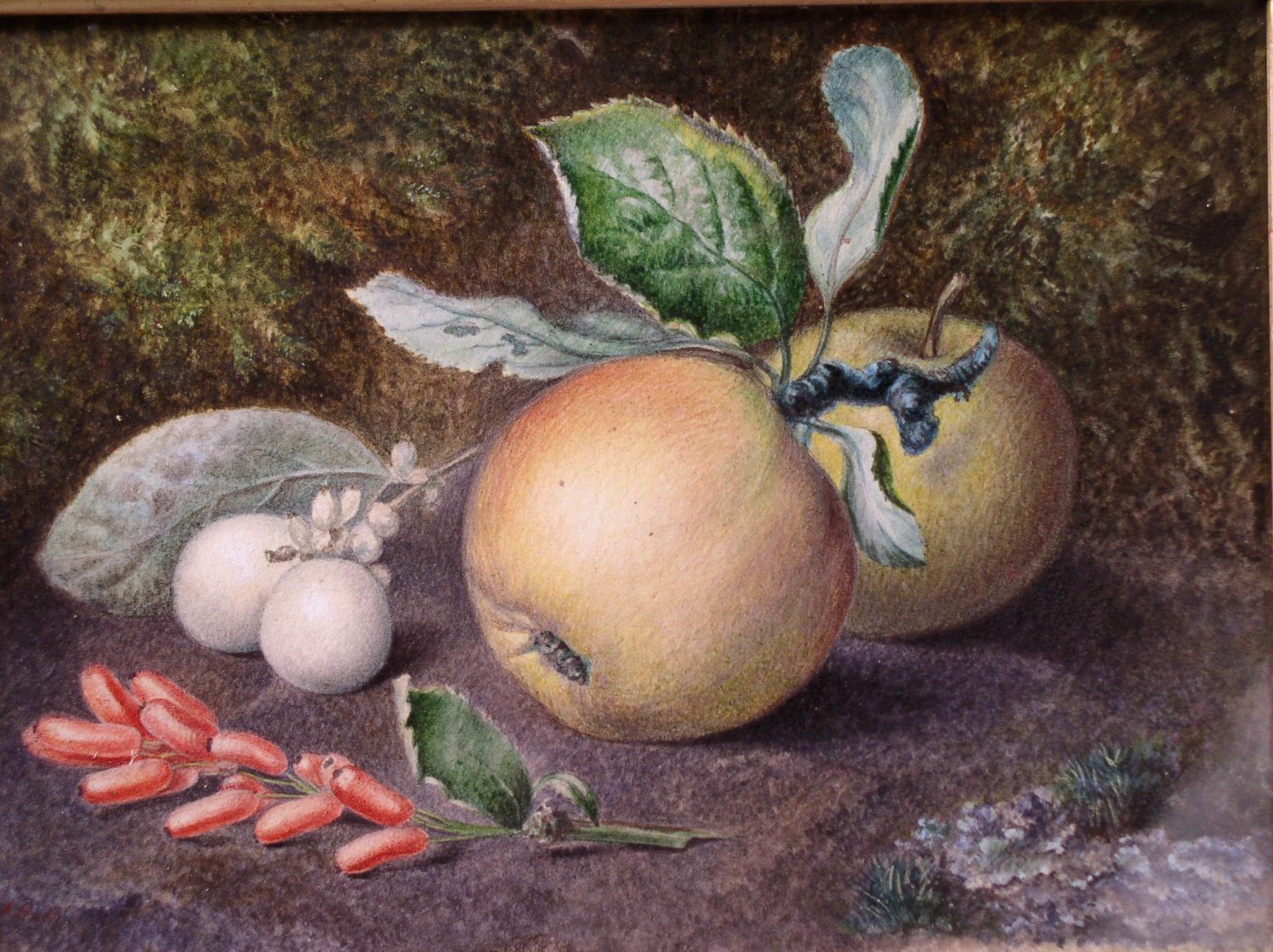 Out of the 120 paintings Annie Elizabeth Clephan and Jane Helen Paget bequeathed to Stockton Council, nine paintings and drawings were created or attributed to nine women artists. Between the nine, there is a varied picture of success and recognition. Some were quite successful as artists, others branched out into teaching and some even played their part in forming art societies.

The aim of this two-part blog is to highlight the artworks and lives of these women, that their skill and contribution to art may be recognised and shared. 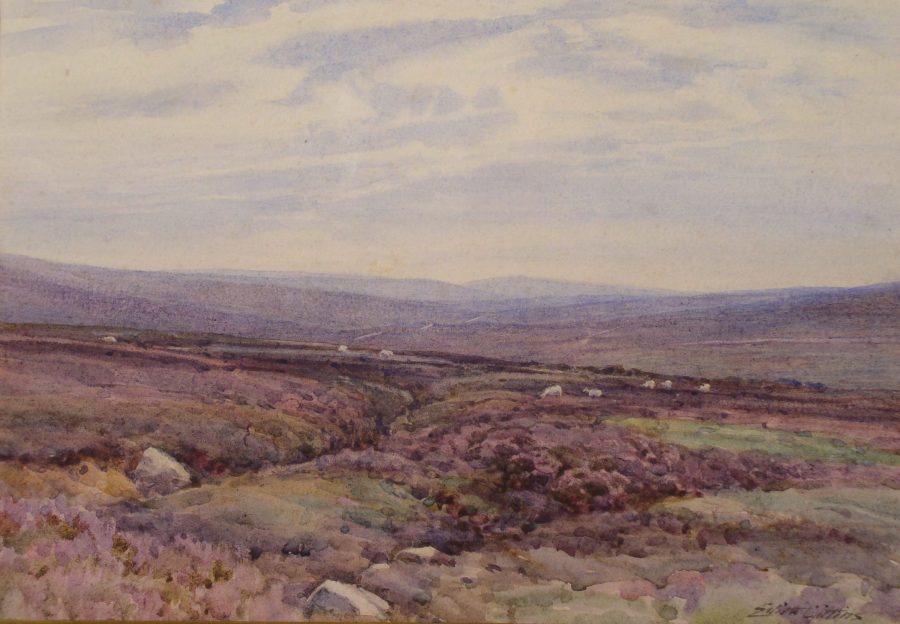 Edith Gittins was an art teacher at the Belmont House School in Leicester and was herself a talented watercolour artist, exhibiting at the Royal Academy in 1878 and 1879. She was a member of the Leicester Society of Artists, and she was also a co-founder of the Leicester branch of the Kyrle Society alongside Alfred Henry Paget.

Gittins dedicated much of her life to fighting for women’s rights, at a time when women had little political power and were denied the vote. She was one of the founding members of the Leicester Women’s Liberal Association in 1886, and was on the committee of the Leicester Women’s Suffrage Society. In June 1908 she joined a march of over 10,000 women in London to campaign for the right to vote. A year earlier she had even gone so far as to attempt to bring a court case claiming that women being denied the vote was unlawful.

Gittins was known to have attended social events around the Leicester School of Art, which were also attended by the Clephan and Paget families, and she may have had good relations with them. It was Jane Helen Paget who bequeathed ‘Bridal of Earth and Sky’ to Preston Park Museum.

‘Bridal of Earth and Sky’ is very indicative of her talent as an artist. Her use of watercolour suggests the shape of heather, grass and sheep, recognisable without becoming too highly detailed. Her composition also translates the vastness of the moor and the sky. 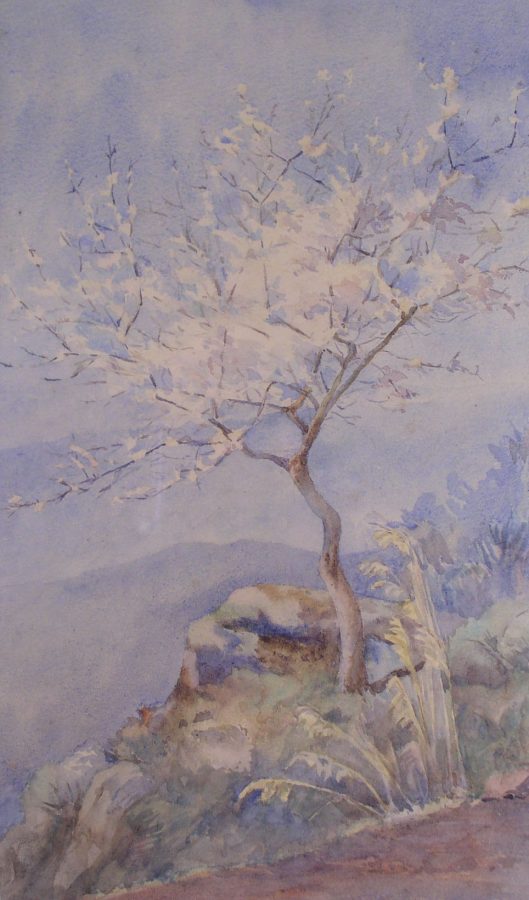 ‘On the slopes of Mount Etna’, by Edith Harvey, watercolour. Image courtesy of Preston Park Museum.

Edith Harvey was born in Leicester in 1858. Her father, Joseph Harvey, was a well-known solicitor in the town, and by all accounts the family were quite wealthy. Harvey, and her younger sister Clara, spent most of their lives in education at the Leicester School of Art. They studied and received certificates in many subjects, ranging from freehand drawing to anatomy. It seemed that Clara may have been the more accomplished artist, as in 1887 she exhibited alongside John Fulleylove, a prominent Leicester-born artist.

Edith Harvey found work as a teacher while undertaking her art studies, but she was also a member of the Leicester Ladies Reading Society. Between the mid-1880s and 1916 she served six terms as the Society’s Secretary and President. Annie Clephan herself was President of the Society twice, so it is possible that the two knew each other.

Harvey did sell her paintings occasionally. An edition of the Leicester Daily Post from 1920 advertises an exhibition of paintings inspired by a holiday to Sicily. It could be that her painting, ‘On the Slopes of Mount Etna’ was bought at this exhibition by Annie Clephan.

Upon Harvey’s death in 1938 she bequeathed £200 to the University of Leicester, formerly the Leicester School of Art. 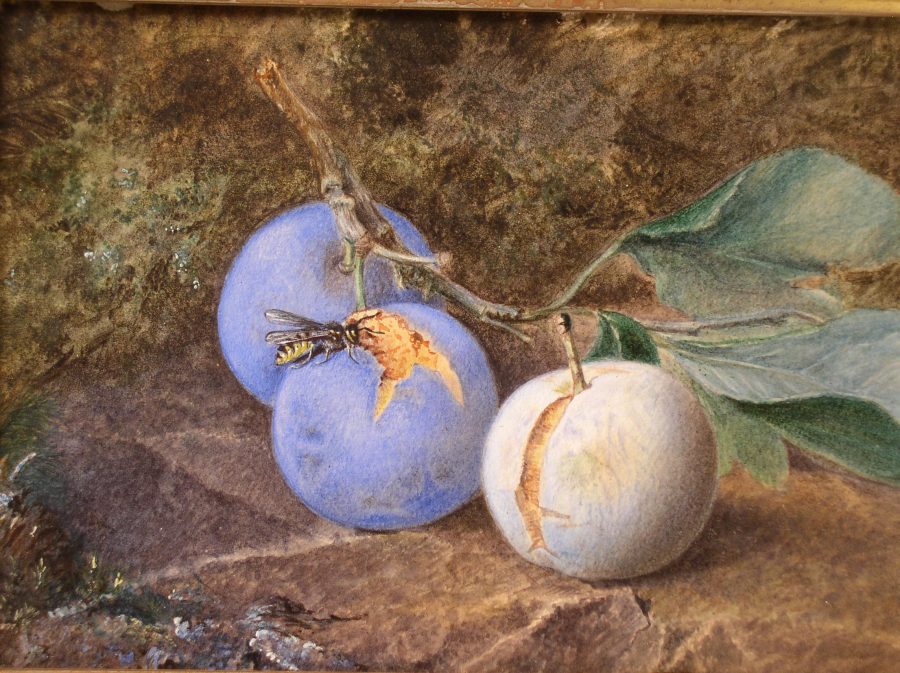 Mary Ann Hull was born in Leicester in 1835. She appears to have exhibited as early as 1851, when she was only 16, as part of the Leicestershire Fine Arts Society and Art Union. A newspaper review scathingly described her exhibited painting as “hasty and wanting in delicacy of touch”. However three years later, she was praised for making a lithograph portrait of a Mr William Gardiner, a local music composer who had been of some importance in Leicester.

Hull went on to live her whole life in Leicester as an Artist and a Teacher of Drawing. She exhibited once at the Royal Academy with a still life, ‘Gooseberries and Currants’. Alongside other local artists including Edith Gittins, Hull would exhibit her works at Leicester’s Museum Lecture Hall. The opening nights were big events in which influential families were invited. This included both the Clephan and Paget families, and Joseph and Edith Harvey were also present at one. It may have been during one of these shows that Hull’s still lifes were purchased by the Clephans or the Pagets.

She attended meetings of the Leicester Society of Artists alongside her brother, Gittins and Edwin Clephan, and worked with the Leicester Institution for the Blind in their home teaching branch. She died in 1919. 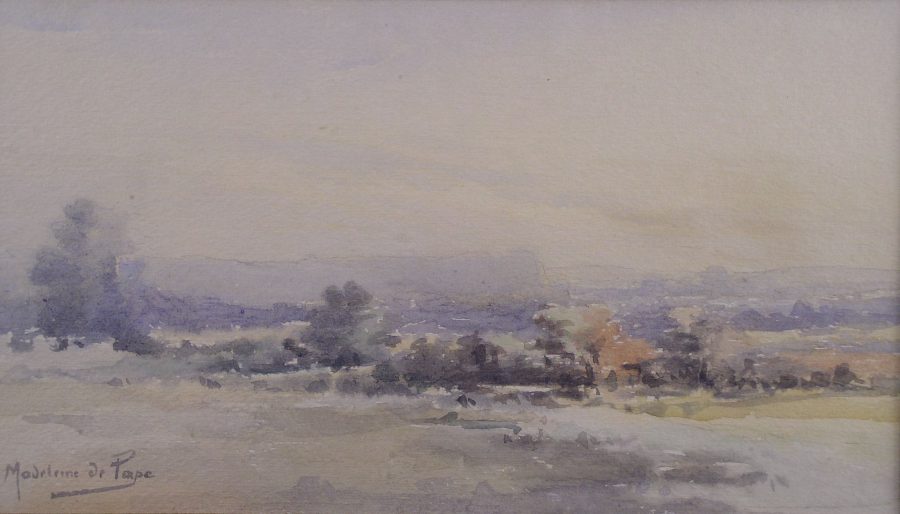 Madeleine Marie Sophie de Pape was born in 1883 in Bruges, Belgium to a very artistic family. Her grandfather, Ferdinand de Pape painted in a Neo-Medieval style similar to Renaissance frescos, and her great-grandfather was a talented goldsmith.

Madeleine de Pape lived and worked in Ostend as a watercolour painter. The seaside location suited her well in painting landscapes and seascapes. In 1908 she and a group of local Ostend artists founded the ‘Cercle Artistique d’Ostend’, an amateur artists association. This had come about as a result of her and her fellow artists being constantly turned away by the Ostend Art Centre, the town’s main art society. The ‘Cercle Artistique d’Ostend’ successfully exhibited and sold their own works. The outbreak of the First World War however brought these exhibitions to a temporary close.

Following the German invasion of Belgium in 1914, De Pape was forced to flee the country. She was one of the estimated 250,000 refugees who arrived in England in the same year. De Pape and many Belgian artists were sent to Leicester, where they were welcomed with open arms by the town’s Refugee Committee, which organised housing and other needs for them. They were also given opportunities to exhibit and sell their artworks.

Two editions of the Leicester Daily Post from 1915 and 1916 advertise exhibitions where De Pape and other Belgian artists sold their work. Their paintings proved to be very popular and sold quickly. It may have been at one of these exhibitions that Annie Clephan or Jane Paget bought ‘Sunset, Huntingdonshire’. The location of the painting suggests that during her time in England De Pape travelled the country for inspiration.

It is unclear what happened to De Pape after 1916. Most Belgian refugees living in Leicester were repatriated to Belgium in 1919, so it could be that she returned home the same year. The ‘Cercle Artistique d’Ostend’ resumed organising exhibitions and continued on until it was disbanded in 1958.

In a fortnight’s time, this two-part blog will be concluded with a look into the remaining five women artists – including an acquisition by a particularly famous artist, and another artist whose identity is shrouded in mystery.