“In public sites, our sculptures reflect both the surroundings and their context, but through our imagination and selective perception – which is what makes them also personal” Claes Oldenburgh 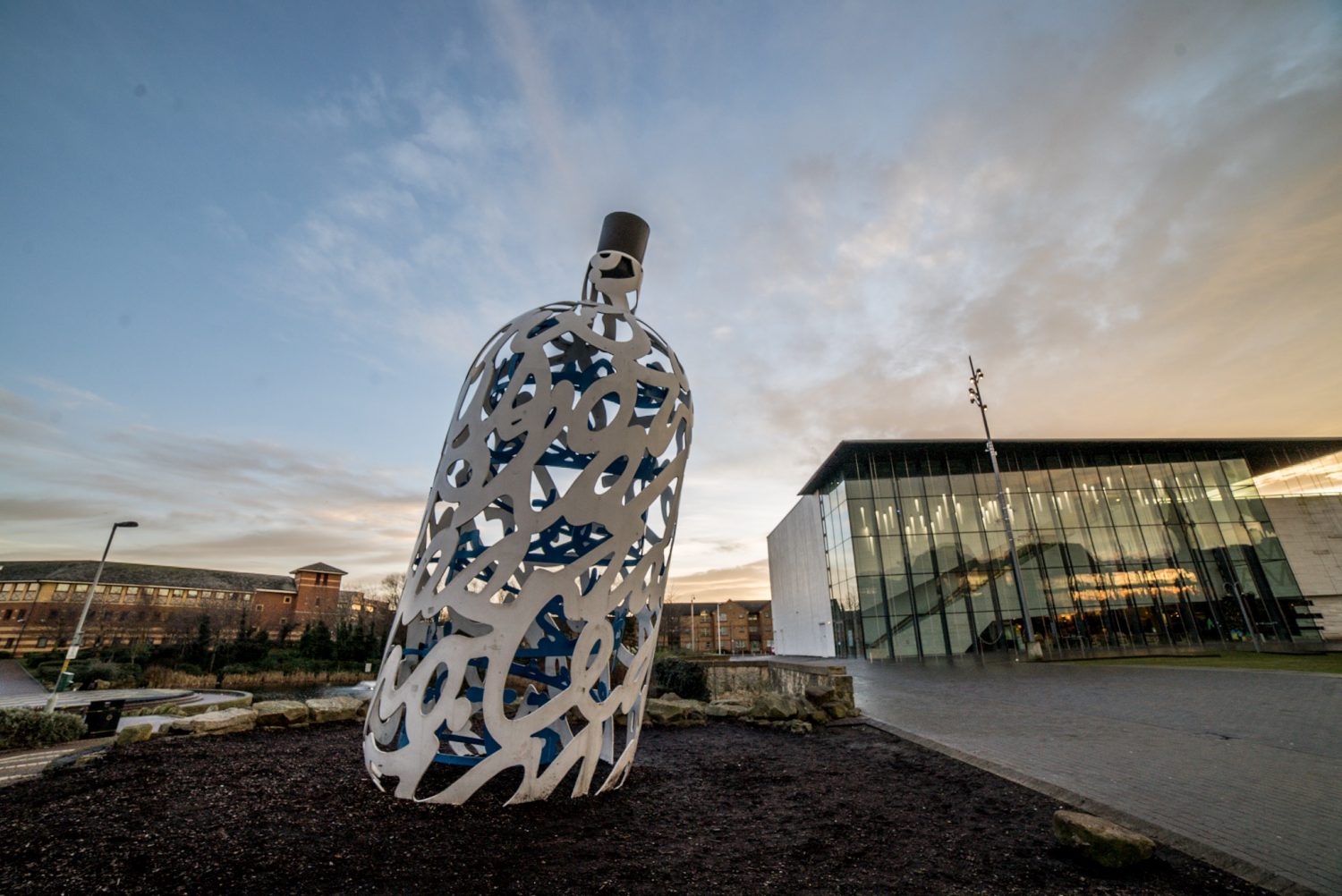 Bottle of Notes by Claes Oldenburg and Coosje van Bruggen, unveiled in 1993 and situated in Middlesbrough Centre Square

Bottle of Notes is a sculpture by internationally renowned artists and creators of public artworks, Claes Oldenburg and Coosje van Bruggen. Unveiled in 1993, it was commissioned by Middlesbrough Borough Council as the first public artwork to be installed as part of a regeneration initiative for the Tees Valley region.

Situated in Middlesbrough Centre Square, outside Middlesbrough Institute of Modern Art (MIMA), the sculpture takes the form of a giant bottle, standing nine metres high – twice the height of a giraffe. The shape of the bottle is made from a continuous, off-white swirl of steel letters. Blue letters spiral upwards from the inside.

The artists took their inspiration from the local area’s industrial heritage, its relationship with the sea and from Captain Cook, one of the area’s most famous sons. The intricate steel lettering reflects the region’s rich heritage in steel production and fabrication. It was constructed in Hebburn, helping to provide employment for steel workers in the shipyards.

For the outside of the bottle, van Bruggen selected a line of text from Captain Cook’s Journals, written during his first voyage of exploration in the Pacific in 1769: We had every advantage we could desire in observing the whole of the passage of the planet Venus over the Sun’s disk. The text on the inside comes from a poem she wrote, ‘Recalling Amsterdam’, which links the English shore to the European continent: “I like to remember seagulls in full flight gliding over the ring of canals.”

The sculpture is positioned on a slant, to appear as if it had been left stuck in the sand by a receding wave – a giant message in a bottle to local people and the wider world.

This commission was a significant move by the Council to use arts and culture to help revitalise the region and its identity. This was a time when Middlesbrough – like many other traditionally industrial towns and cities, was experiencing a period of change and looking to the future. Initially met by local people with a mix of intrigue, genuine bewilderment and, in some cases, outright hostility, Bottle of notes has now become part of the landscape. It remains the only example in the UK to date of a public sculpture by these celebrated artists.

Oldenburgh and van Bruggen are a husband and wife team who have created monumental public art installations around the world. Their works are characterised by giant, colourful replicas of everyday objects, including a lipstick, trowel and an inverted ice-cream cone (which appears to have dropped out of the sky onto the top of a shopping mall, in Cologne).