James Cook was born in the small village of Marton near Middlesbrough in 1728. As a young man he gained his first experience of the sea working for a coal merchant in the nearby town of Whitby, working his way right up through the ranks before joining the Royal Navy in 1755. Cook became a brilliant navigator and developed an ambition to go not only ‘farther than any man has been before me, but as far as I think it possible for man to go’. 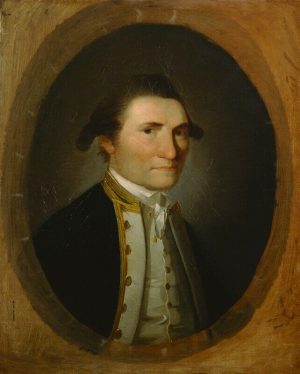 With his crews of sailors, scientists and artists, Cook famously explored the Pacific Ocean during three voyages made in the late 1700s. His voyages transformed knowledge and understanding among Europeans about the wider world and its people. He charted the coastlines of countries like Australia and New Zealand that were largely unknown to Europeans. His officers and crew brought back objects and hundreds of sketches and paintings of the things they saw on the other side of the world, capturing the public’s imaginations with images of ‘alien’ animal species like Dingos and Kangaroos.

Cook died in Hawaii on his third and final voyage. Cultural differences between the islanders and the crew led to difficulties between them and relations turned hostile. Cook tried to take the Hawaiian Chief hostage and was killed on February 14th, 1779.

Captain Cook became nationally and internationally famous and demand led to portraits of him being made after his death. This portrait was painted from life, on Cook’s third and last voyage, by artist John Webber. Cook’s contribution to British Society was thought to be so significant that paintings and objects relating to him and his voyages are still collected and exhibited in museums and galleries around the country and the wider world.