“Growing up in a company town surrounded by monumental industrial structures; strange, unexpected sounds, and strong smells that no longer exist, but can be remembered, was an intensely theatrical experience. It formed how I use space, materials, colour and words… I am constantly working out new ‘hyperlocal’ ways of thinking about monumental narratives about places.” Annie O’Donnell 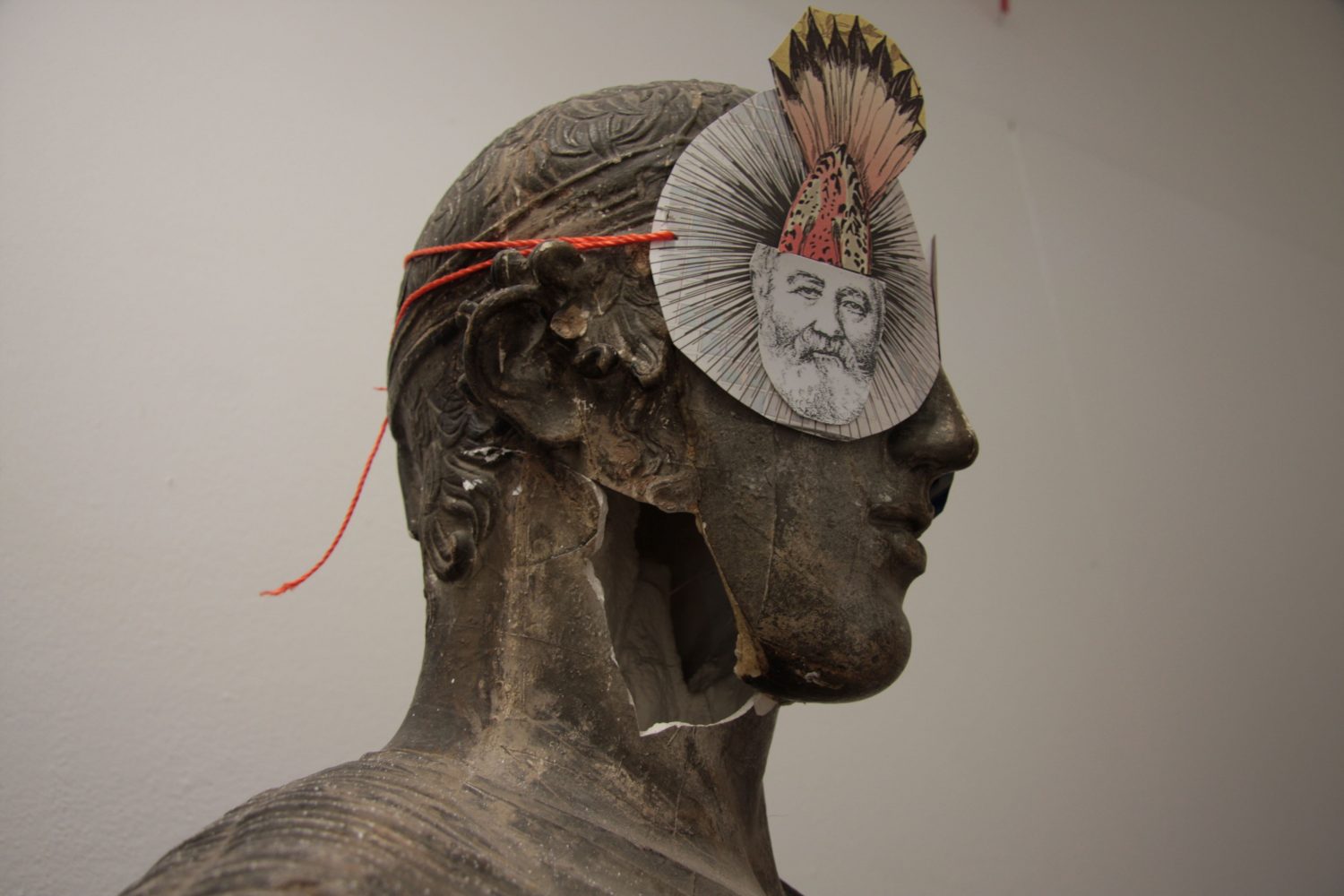 He Who Holds The Reins (Charioteer of Delphi) by Annie O’Donnell, 2012

Annie O’Donnell lives in Billingham on the north bank of the River Tees. Her family came to the area from Ireland to work in ICI, a large chemical factory. She is from the first generation born here. As she points out, many Teessiders have similar, recent connections to industry, and carry older stories from other places.

O’Donnell trained as a dancer and worked as a dance teacher and choreographer for twenty-five years. This had a huge influence on her art work, as did the local area, Annie O’Donnell says:

“Growing up in a company town surrounded by monumental industrial structures; strange, unexpected sounds, and strong smells that no longer exist, but can be remembered, was an intensely theatrical experience. It formed how I use space, materials, colour and words… I am constantly working out new ‘hyperlocal’ ways of thinking about monumental narratives about places”.

He Who Holds The Reins explores themes and questions about Power and Place. Who orders statues to be made? Why do they stand in certain places and not others? Who are the people in the sculptures and what did they do? Why are they sometimes moved or removed? It also explores the idea of the ‘hyperlocal’ – hyperlocal can mean anything which is important or relevant to a particular place and its community. The work also examines how ‘place’ can help us understand ourselves and others. It shows what O’Donnell describes as her obsession with past, present and future stories, and with belonging and displacement.

The sculpture in the photograph is a plaster cast of the Charioteer of Delphi (c. 478 BC) – one of the most famous surviving bronze statues from ancient Greece. It is also known as Heniokhos, which means ‘he who holds the reins’ in Greek. The name of the young charioteer is now not known, but the name of the powerful family who it is dedicated to (Polyzalus) is still remembered. The original statue included a chariot, six horses, and two grooms, but this plaster cast of the charioteer stands alone on a staircase landing at Newcastle University – which is where O’Donnell first saw it.

Annie O’Donnell decided to make The Charioteer a pair of ‘hyperlocal’ goggles. The unseen side of the goggles shows an image of a horse, which represents The Charioteer’s ‘hyperlocal’. The other side holds an image of Henry Bolckow, which represents O’Donnell’s ‘hyperlocal’ (Henry Bolckow, along with his business partner John Vaughn, co-founded Middlesbrough which is very close to O’Donnell’s hometown). Bolckow’s own statue in Middlesbrough has been moved to various places in the town at various times.

O’Donnell is fascinated by how we build understandings of space when we’re very young. She has explored this through her dance work and now through her work as a visual artist. Her pieces usually take a playful, sculptural form and are life-size, often using high colour. She is known for her use of plastic, a material she uses as a metaphor for the ‘toxic’ world that first developed it and to explore what it might mean for people today. Her sculptures often inhabit sites that look like theatre sets. Recently she has begun to collaborate with dance and sound artists to create ‘wearable sculptures’ which can move as part of a theatre set or story.

Annie O’Donnell is represented as an artist by Platform A art gallery in Middlesbrough.

*He Who Holds The Reins” is part of the collection at Middlesbrough Institute of Modern Art (MIMA) part of Teesside University.

Image supplied by the artist; photo taken by Kraig Wilson, another artist based on Teesside.