“It was filthy, mucky and it was black, but it was fantastic…that was my time and I do miss it, that’s why I paint it, because that was the world I belonged in.” (David Watson) 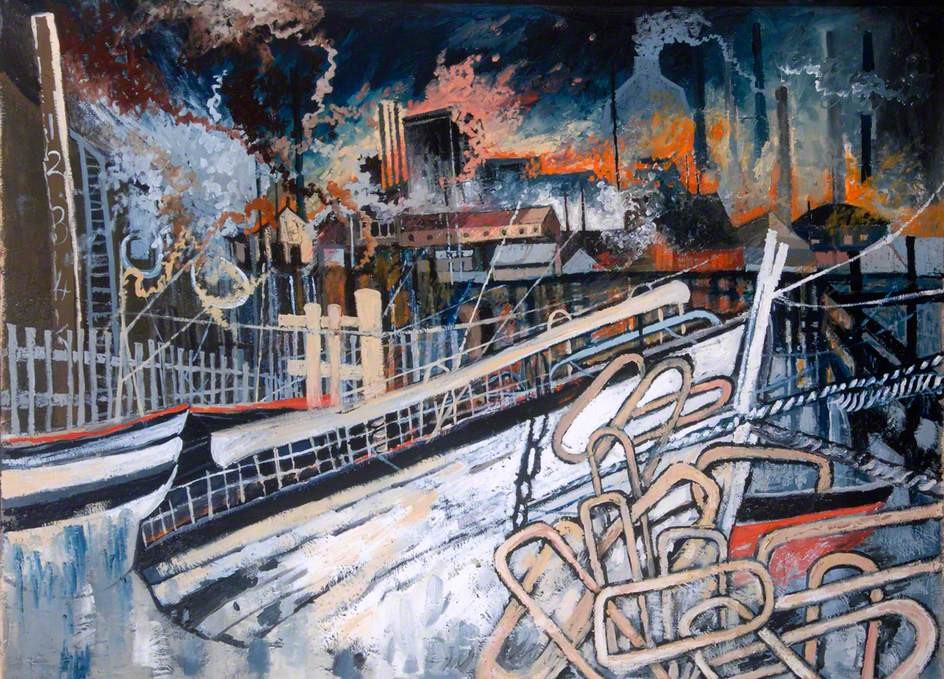 Shape Form of Redcar by David Watson, Oil on hessian

David Watson was born in South Bank (1944), in an industrial area of Middlesbrough. At the age of 11 he was encouraged to join his school art club, where he became a regular member, and went on to study art at Middlesbrough College. At 19, he began working locally at Smith Docks as a ‘Red Leader’ (named after the toxic red lead paint used to coat the hulls of the ships to protect them against rust) before eventually becoming a painter and decorator.

Despite often grueling days at work, Watson concentrated on his art work, painting as often as he could in his spare time. In the early days, when money was particularly tight, Watson and his wife Brenda made ‘canvases’ by stretching curtain lining fabric over homemade frames made from wood he found locally. His paintings focused on the industrial landscapes of his hometown and people going about their everyday lives. He captured the angular shapes, heat and smoke of the local dockyards and steelworks, the physical toll on the workers who laboured in them, and the eventual decline of the steel industry.

Recording these local people and places has always been of great importance to him, and his work continues to focus on what is now a bygone industrial era, but very much ‘his world’. The ships’ hulls of his early working life remain a lasting motif.

Watson’s paintings are deceptively accessible. They reflect an honesty and naivety of style while capturing the very essence of his subjects. They often feature the ‘impasto’ technique, which involves laying paint onto the surface with a brush or knife in layers thick enough for the strokes to be visible. Sometimes colours are mixed directly onto the painting itself. This is a technique Watson uses to great effect, along with an almost ‘industrial’ colour palette.

It has taken most of David Watson’s life for him to become a celebrated artist. Although he is now described as ‘one of the most important artists the North East has produced’, he still lives just a short distance from where he was born and continues to paint in his spare room.